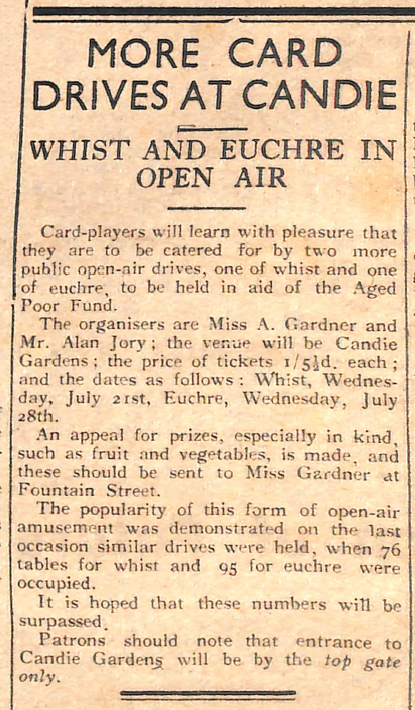 The card game of Euchre can arguably be considered Guernsey’s national game.

Across the island there’s a collective enthusiasm for the game that has resulted in leagues, clubs, Euchre drives and many a private euchre party. This love affair goes back a long way – even occupation by Nazi Germany couldn’t quench this love affair. Occupation newspapers were frequently full of Euchre League news. In July 1943, whilst the German Army grappled with the Soviets at the battle of Kursk, a week long open air Euchre drive attracting hundreds of players was held at Candie.


Before we look at how to play we should make one caveat – There can be quite a few variations in the rules & conventions of a Euchre game – so what follows is the most usual form played in Guernsey! Accordingly we beg your indulgence from any euchre fussbudgets reading this article 🙂

Euchre is a trick taking type of card game and can be played with 2 or 4 people however it’s best and most usual for 4 participants, playing 2 against 2 as partners. In this article we only consider the rules for the four-hand version.

So here’s the low down on the game that’s gripped and continues to grip Guernsey’s card playing community.

The standard 52-card pack needs to be stripped down to make a deck of either :

In some games, a joker is added.


In Guernsey Euchre is generally played with 32 cards plus the joker as per the United Euchre League site.

Object Of The Game

The goal is to win at least three tricks. If the side that fixed the trump fails to get three tricks, it is said to be “euchred.” Winning all five tricks is called a “march.”

If hearts were chosen as trumps then ranking would be as follows:

The following shows all scoring situations :


The first player or partnership to score 5, 7 or 10 points, as agreed beforehand, wins the game. In the 5-point game, a side is said to be “at the bridge” when it has scored 4 and the opponents have scored 2 or less.