Firsts of World War I – Gas

If we were to ask : Who used gas first in WWI and when? – the chances are that most people would say ‘The Germans at 2nd Ypres in April 2015’. The surprising fact is that it was not. It was actually the French who first used gas as a weapon of war and they did it in the very first month of the war.

It was in August 1914, in the face of the relentless German advance, that the French were the first to use gas in warfare. Instead of the deadly poison gas used later on in the conflict, the French released xylyl bromide – otherwise known as tear gas. The gas was delivered inside 26 mm grenades. However given the small quantities of gas delivered, roughly 19 cm³ per cartridge, it wasn’t even detected by the Germans. The stocks were rapidly consumed and by November a new order was placed by the French military. As bromine was scarce among the Entente allies, the active ingredient was changed to chloroacetone.

When, in April 1915, the Germans made the first successful use of poisonous gas, they used chlorine, chiefly because as a common byproduct of industrial chemical processes it was readily available in quantity.

Chlorine is a heavier-than-air gas that forms a thick green-coloured cloud that clings close to the ground, and which easily finds its way down into trenches and dugouts. It acted by displacing the air and thus choking its victims through lack of oxygen.

The Allies were quick to produce some crude counter-measures to chlorine gas; breathing through rags soaked in bi-carbonate of soda or even urine provided some basic protection. The Germans moved on to using other gasses such as Phosgene but the Allies countered it by producing more efficient gas masks. 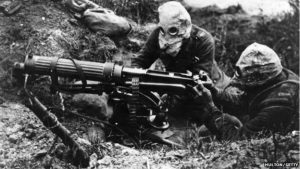 They also retaliated with gas attacks of their own. For the rest of the war a particularly grotesque kind of arms race developed in chemical warfare, with the Germans placing emphasis on producing ever more deadly gaseous agents while the Allies concentrated more on producing increasingly effective gas masks as protection against them.

Early gas mask designs were little more than hoods made of a fabric material impregnated with the likes of sodium bicarbonate, but as the Germans introduced gases other than chlorine, so the mask designs and the filter agents used in them to nullify the effects became more sophisticated. Development eventually led to the introduction by the British of the ‘Large’ and then ‘Small Box Respirator’. 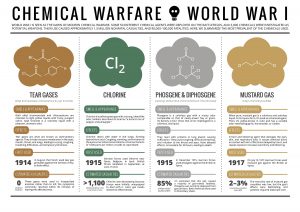 Two months after the use of tear gas the Germans would deploy gas that caused sneezing fits. It was only in 1915, on both the Eastern and Western Fronts, that the Germans would unleash the murderous chlorine gas.

Chemical weapons were considered uncivilised and had been banned under the Hague Conventions of 1899 and 1907. In 1915, frustration drove the Germans to turn to their highly developed chemical industry to try to find a war-winning solution.

It was against the Russians on the Eastern front though, that the first use of poisoned gas occurred, not as commonly believed in April 1915 against the French.

The German 9th Army under General August van Mackensen attacked toward Warsaw. The advance, known as the Battle of Bolimov, was opened by 600 artillery pieces bombarding the Russian positions with 18,000 poison gas shells – the first time poison gas had been used in the war. However, the intense cold and adverse winds minimised the impact of the poison gas to such an extent that the Russians hardly noticed its use and they failed to notify their allies.

The first use on the Western Front came on the afternoon of April 22 1915, at the Second Battle of Ypres, when the Germans opened cylinders holding 171 tons of chlorine gas along a four-mile section of the front.

The prevailing wind carried it towards the French lines causing 6,000 casualties. The gas attacked wet tissue — the lungs and the eyes — and the deaths were agonising:


“like drowning, only on dry land” … according to one witness.

The French troops panicked and ran. The Germans, many of whom had been killed releasing the gas, were reluctant to press the attack and the advantage was lost.

The Allies soon retaliated in kind. Phosgene and mustard gas followed, but so too did the development of efficient gas masks and, despite accounting for about a million casualties, the use of chemical weapons never produced more than tactical and temporary successes. The verdict of the battlefield was that they were more trouble than they were worth and it was unsurprising that neither side would make use of them in the next war.

Bent double, like old beggars under sacks,
Knock-kneed, coughing like hags, we cursed through sludge,
Till on the haunting flares we turned our backs
And towards our distant rest began to trudge.
Men marched asleep. Many had lost their boots
But limped on, blood-shod. All went lame; all blind;
Drunk with fatigue; deaf even to the hoots
Of disappointed shells that dropped behind.

GAS! Gas! Quick, boys!– An ecstasy of fumbling,
Fitting the clumsy helmets just in time;
But someone still was yelling out and stumbling
And floundering like a man in fire or lime.–
Dim, through the misty panes and thick green light
As under a green sea, I saw him drowning.

In all my dreams, before my helpless sight,
He plunges at me, guttering, choking, drowning.

If in some smothering dreams you too could pace
Behind the wagon that we flung him in,
And watch the white eyes writhing in his face,
His hanging face, like a devil’s sick of sin;
If you could hear, at every jolt, the blood
Come gargling from the froth-corrupted lungs,
Obscene as cancer, bitter as the cud
Of vile, incurable sores on innocent tongues,–
My friend, you would not tell with such high zest
To children ardent for some desperate glory,
The old Lie: Dulce et decorum est
Pro patria mori.