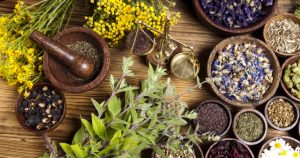 Guernsey folklore possesses a rich set of ancient cures and remedies for various ailments intermingled with many superstitious tales. Some of these so called ‘cures’ seem utterly extraordinary to us today however there are others that have since been revealed to be beneficial despite having been dismissed as nonsense many decades ago. Modern science has shown that our ancestors weren’t so ignorant after all. In this article we look at a few.

Ancient Remedy : The Lick of the Dog to heal a cut

Whilst “licking ones wounds” is a familiar phrase. Our ancestors took it literally. Local folklore recommended that anyone with a fresh cut should get a dog to the lick it – sounds like ‘quack medicine’ doesn’t it? However, we now know that saliva contains a protein called ‘histatin’ which has anti-bacterial properties , which is entitely beneficial to have on a cut and explains why animals instinctively lick their wounds. If someone cut themselves the old Guernsey folk would say ‘bavé déssus!’ which means ‘spit on it!’

For a long time people held the belief that the hands of the reigning monarch had healing powers. Guernsey people were no different and often the ill amongst the poor of the island were given money by the church to receive the Kings blessing …

“On 26th August 1678 the sum of 30 livres tournois was removed from the alms-box given to Caterine de Garis, Jean Haron’s wife, to go to England and there to have his Majesty lay his hands on a young girl who is affected by scrofula. The sum has been granted to have a consent of the Church Officials”

Ancient Remedy : The power of a spider to treat the wound

Guernsey folk believed that spider silk had wound healing properties. This remedy was dismissed many decades ago. However a scientific study undertaken in 2012 found that clean spider silk had bacteriostatic properties which means that it prevents bacteria from reproducing. When applied to a wound, it would prevent the bacterial infection from spreading and so allow time for the patients’ own antibodies to deal with it. Spider silk is also rich in vitamin K, which encourages blood coagulation. The edges of the wound could be held together with layers of the sticky threads. The silk could also form a protective ‘cover’ for the wound which helped keep it dry and clean as well as providing a lattice for new tissue growth to develop on.

Ancient Remedy : A Plateful of Snails Cures a Bad Chest

Local people recommended the use of snails for treating respiratory illnesses such as tuberculosis. Swallowing a bowl of raw snails every day was believed to offer a cure.

Apart from the ‘yuck factor’, on the face of it this seems like a ridiculous suggestion. However, modern scientific analysis has shown that snail mucus contains numerous active chemical compounds which help heal skin infections, injuries and burns. Other snail chemicals, such as helicidine, have been shown to have broncho-relaxant properties so would have relieved some of the more acute symptoms experienced by sufferers.

So, maybe the old folks were right after all … (well sometimes!)