Guernsey Legends – Duke Richard of Normandy and the Devil

The Devil at large in Guernsey

Over the years Guernsey folk have noticed many strange imprints on rocks and granite boulders. They’ve been led to believe that they are marks made by the Devil’s cloven feet as he has prowled around our island home. This legend is one such tale about how Duke Richard of Normandy actually met the Devil as he roamed the island and has come down to us today as it was recorded in the Cronique de Normandie when it was published in Rouen in 1576.


Duke Richard of Normandy and the Devil

The story starts with Duke Richard said to have been a descendant of the famous Duke William of Normandy, famed forever to be known as William the Conqueror.

Poor Duke Richard had heard of the exploits of his famous ancestor, but never had the chance to show that he too was a great soldier. It was a time of peace in Normandy and although he made sure that his archers were trained, and could fire arrows with deadly accuracy, there was never any call to use these weapons in war.

The country was prosperous, and Duke Richard could think of more pleasant pastimes than fighting. He had an eye for the ladies, and was thinking of a beautiful Countess who lived in a manor house near one of his castles. He sent a messenger ahead to warn the servants in this castle of his impending visit, and to tell them that he would be inviting the Countess and her ladies-in-waiting to a great ball. He knew that preparations would take many days. Deer would have to be caught in the great forest, so that venison could be roasted, there would be sweetmeats and pies to prepare, and fruit and nuts to be collected. Flasks of wine would have to be brought from the great cellars of the castle, and there must be music. The Duke knew there was a band of travelling musicians roaming the countryside near his castle, so he instructed his servant to arrange for music to be played, and to obtain the services of a jester. Well pleased with his plans, Duke Richard rode slowly along the river bank. He was a handsome man, but not a vain man. He knew that maidens blushed as he passed, and that he was considered to be a very eligible bachelor, but he did not let this become a conceit; he was really quite a humble man as well as a brave man. 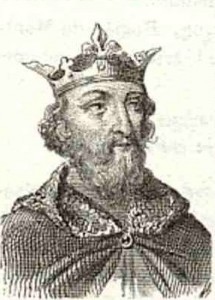 So it was not surprising that a man as good as Duke Richard should cause jealousy and resentment in the Devil. As he rode along on a snow white horse, Duke Richard saw a man on a jet black horse approach him. “Good-day sir” called the Duke, “Good-day” replied the man in an affable voice, and galloped towards the Duke as if to converse. Fortunately Duke Richard noticed a cloven hoof in the stirrup of the black horse, and was able to turn his own horse before a lance, which had suddenly appeared in the hand of his opponent, could strike him to the ground. The two dismounted and a fierce fight ensued. Back and forth they swayed, until with almost super-human strength the Duke sent his enemy fleeing. Feeling rather shaken, Duke Richard remounted and rode towards his castle.

He had only gone a short distance when he saw a beautiful lady in a boat moored by the bank of the river; the shining gold of her hair was the colour of ripe corn, and the blue of her eyes was like the blue of the sky. She beckoned to the Duke and he felt himself drawn towards her. She motioned him to join her in the boat, and produced a flagon of crystal clear liquid and two goblets. It was a very hot day and the Duke was only too glad to accept the goblet she offered him. The lady smiled sweetly as he drank, and he felt his eyelids begin to dose. When he awoke, the moon was shining, and he was not on the river any more but in the open sea. In bewilderment he turned to the beautiful lady, and found himself staring into the malevolent eyes of an ugly old crone ;claw like hands gripped the oars, and two cloven feet showed beneath a long black cloak. It was of course the Devil, who furious at losing the first battle, was determined to win this time.

They neared an island, and the Devil grasped the Duke in his claws and rose into the air. As they flew over some cliffs the Devil dropped his distinguished captive, then flew inland, paused a moment on a granite rock, and rose again in the air, with an evil laugh, convinced that the shattered body of the Duke lay on the cliff-top. However, Duke Richard had landed on some soft green turf. He lay stunned for a minute, conscious of a sweet smell all round him, then standing up he saw in the early morning light the golden gorse on the cliff. He did not realise of course that he was in Guernsey at Jerbourg point, and turning he gazed in amazement at a small town he could see in the distance, rising tier upon tier above a harbour.

He made his way to this town and spoke to a fisherman, who told him that he was in St Peter Port in the island of Guernsey. The fisherman, seeing the velvet and brocade garments of the stranger, and a signet ring with a crest bowed courteously, and took the Duke straight to the Bailiff, who gave him food and shelter. When he was rested the Duke was taken back to Normandy. He never forgot the kindness he had received in Guernsey and be never forgot how the Devil had carried him across the sea and dropped him at on the cliffs of Jerbourg.


How to find the imprint

The stone at Jerbourg, which is said to bear the mark left by the Devil’s claw, stands in a hedge on the right hand side of the road, where the slope towards Doyle’s column begins. It is a large mass of white quartz, and has the black mark of the Devil’s claw imprinted in it