Home » General Interest » How do Spiders build their webs over such long distances ?

How do Spiders build their webs over such long distances ? 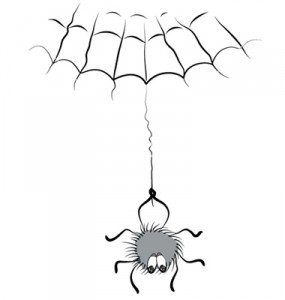 Here at guernseyDonkey.com we like to ask (and try to answer), some of life’s bigger questions: What is reality, what is consciousness … “How do Spiders build their webs over such long distances ?”


As you make your way down to the shed at the bottom of the garden in the early morning you suddenly blunder into a line of thread suspended between 2 trees or hedges many meters apart with no obvious means of support, that you know for a fact wasn’t there last night. I have often puzzled about this ‘how do they do it?’. Did they start it high up in a tree scurry down to the ground trailing a silken thread & then dash up the other side to pull it tight ?

Actually, no. The answer is, well, blowing in the wind: the spider climbs up to an exposed spot – like the top of a fence – works out where the breeze is coming from and feeds out an extremely fine thread. Like an angler, the spider then waits until it can feel some tension in the thread, showing that it’s caught on to something on the other side of the gap. It then pulls this “bridge thread” tight and scampers across several times, laying down extra threads, which rapidly increase its thickness and strength. From the mid-point, the spider then drops down, releasing a second thread on the way, which it fixes at a lower level. Pulling this tight creates a Y-shaped structure, around which it can start building its web.

The answer is blowing in the wind

It is a neat trick perfected by around 3,000 species of spider. Some species of tropical spider can make webs over 2m across. However, I suspect that many of those long lines of thread we find across our path are the result of a spider being unlucky with the breeze and only finding a point of attachment at some ludicrous distance from its starting point. Still now you know !