Home » Science » How Will Continental Drift Affect Future Maps of the Earth?

How Will Continental Drift Affect Future Maps of the Earth? 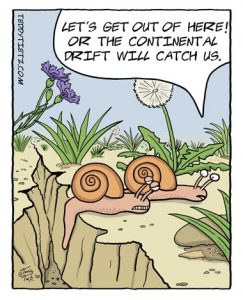 This is something to warm the heart of every Brexiteer, because Britain will NEVER in a million years (or even 250 of them) ever be a part of continental Europe … so read on.

The idea of continents meandering across the face of the Earth is surely one of the most mind-boggling in all science and it is hard not to feel sympathy with the distinguished academics who dismissed it when it was mooted by the meteorologist Alfred Wegener a century ago. Nowadays, even school science texts include maps showing the changing face of our world over the last few hundred million years.

Continental drift is still underway, propelled by the roiling currents of magma beneath our feet. According to satellite measurements, Europe and America are separating at the rate of a few centimetres every year.


Where Are We all Heading?

Given the different directions in which the various continents are headed, projecting what the world will look like in the future is no easy task but Professor Christopher Scotese and his colleagues at the University of Texas, Arlington have had a shot at it, with fascinating results.

Britain will still be refusing to join Europe even 250 million years hence, when all the rest of the world’s continents will have fused together to form a “supercontinent”

Approximately 50 million years from now, the most striking change to have taken place will be the disappearance of the Mediterranean Sea, as Africa will have smashed into Europe, closing up the sea-filled gap. America and Europe will have grown much further apart but Eurosceptics will be delighted to know the UK will still not be part of Europe: indeed, according to Scotese’s calculations, Britain will still be refusing to join Europe even 250 million years hence, when all the rest of the world’s continents will have fused together to form a “supercontinent”.