Home » General Interest » Is it true that water empties out of sinks anti-clockwise in the northern hemisphere ?

Is it true that water empties out of sinks anti-clockwise in the northern hemisphere ? 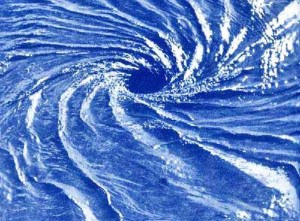 It’s often said that water draining out of a sink or bath swirls down the plughole anti-clockwise in the Northern Hemisphere and in the opposite direction south of the Equator. The explanation is supposed to be the Coriolis Force, which affects anything that tries to move across the face of a spinning object – such as bathwater on the rotating Earth. The Coriolis Force plays a key role in making atmospheric depressions and hurricanes coil in an anti-clockwise direction as they move north of the Equator.

The explanation is supposed to be the Coriolis Force

The trouble is that it is very feeble and the resulting acceleration only produces significant effects over relatively long timescales. In the case of water draining out of a bath, the Coriolis Force produces an acceleration ten million times weaker than gravity and its effects are thus easily masked by, for example, a very slight tilt of the bath.>

That said, in 1961 the science journal Nature reported that Dr Ascher Shapiro, in Massachusetts, had successfully detected the Coriolis effect in extremely careful experiments, which showed water flowed anticlockwise out of a two metro wide tank. In 1965, a team at the University of Sydney, led by Lloyd Trefethen, repeated the experiment south of the Equator and found that the water did indeed swirl out in the other direction.

Surprisingly, the Coriolis Force also has a significant effect on anyone taking a stroll or at least it would, were it not for the friction between our feet and the road, a rough calculation shows that someone walking for a mil down a road would be driven off-course by around 180 yards, Thus, if the road were icy and we slid down it, we would find ourselves having to take evasive action to counter the effects of the Earth’s rotation (there claims-probably apocryphal that Antarctic penguins tend to walk in paths that curl round to the left).