Published on Jan 3, 2012 in Science, Technology

Photovoltaic (PV) Solar Panels generate electricity by the Photovoltaic Effect. Photovoltaics is the direct conversion of light into electricity at the atomic level. Some materials exhibit a property known as the photoelectric effect that causes them to absorb photons of light and release electrons. When these free electrons are captured, an electric current results that can be used as electricity.

The photoelectric effect was first noted by a French physicist, Edmund Bequerel, in 1839, who found that certain materials would produce small amounts of electric current when exposed to light.

For traditional PV solar panels two halves of one pure silicon crystal are doped with two different dopants (e.g. arsenic, gallium, aluminium, phosphorus). One half of the crystal is left electron deficient – i.e. the atoms it contains are short of electrons. This is called the p-type layer. The other half of the crystal has an excess of electrons – this is called the n-type layer.

Since one half of the crystal has a lot of electrons, and the other half does not, there is an electric field across the junction between the two halves. Electrons in the crystal can only travel in one direction – from the electron rich half to the electron poor half.

Where the two halves of the crystal meet is called a PN junction, and this doped crystal is a semiconductor.

As the silicon atoms themselves do not move, any holes which remain uncovered by electrons in the n-type side are left positively charged, and any electrons without holes to cover in the p-type side remain negatively charged. This leaves positive material close to the junction in the n-type side, and negative material close to the junction in the p-type side with a potential between the two sides of around 0.6-0.7 volts in a silicon PN junction.

With this equilibrium position reached there are two equal and opposite electric currents flowing – holes in one direction and electrons in the other direction – across the depletion region.

The light from the sun is made up of packets of energy called Photons. Each photon carries an amount of energy corresponding to its wavelength of light.

When a visible light photon strikes a solar cell it can do one of three things: pass straight through, be reflected, or be absorbed. If the photon is absorbed, its energy is absorbed by an electron in an atom of the solar cell enabling it to escape from its normal position (photon excitation), cross the junction and fill a hole. Since electrons are physically moving across the PN junction, the positive charge carrying holes are effectively moving in the opposite direction around the load circuit (a rechargeable battery or light bulb etc). This completes the circuit providing more holes for the electrons to combine with and providing usable electricity. 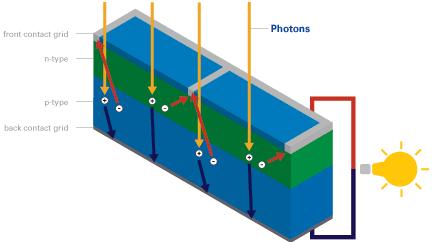 This process can be repeated over and over again over the many decades of usable lifetime of solar cells. Energy from the sun can be extracted in this way using a standard solar cell at an efficiency of around 5-15%. Modern more efficient solar cells have multiple junctions and are around 4% efficient, however the principles are the same.