Home » General Interest » If Humans Could Fly How Big Would Their Wings Have to Be?

If Humans Could Fly How Big Would Their Wings Have to Be?


If Humans Could Fly How Big Would Their Wings Have to Be? :  In short…Very Big!

Humans were clearly not meant to fly … we weigh a lot more in proportion to our size than birds, which have hollow bones

In order to fly, wings have to create as much lift upward as the person’s weight pulls downward. There is a minimum forward speed and a minimum wing area to create the needed lift.

The equation for lift is :


When you do the calculations, you find that for a person of average size to fly they would need a wingspan of between 6 to 7m. In addition their chest muscles would need to project out to about 1.25m. We’d also need a ‘keel’ bone protruding down the centre of our chest, to allow these pectoral muscles to attach further from the shoulder, increasing the leverage. Our legs would have to be spindly stilts as well. Not practical at all.

Humans were clearly not meant to fly! Remember, we weigh a lot more in proportion to our size than birds, which have hollow bones. 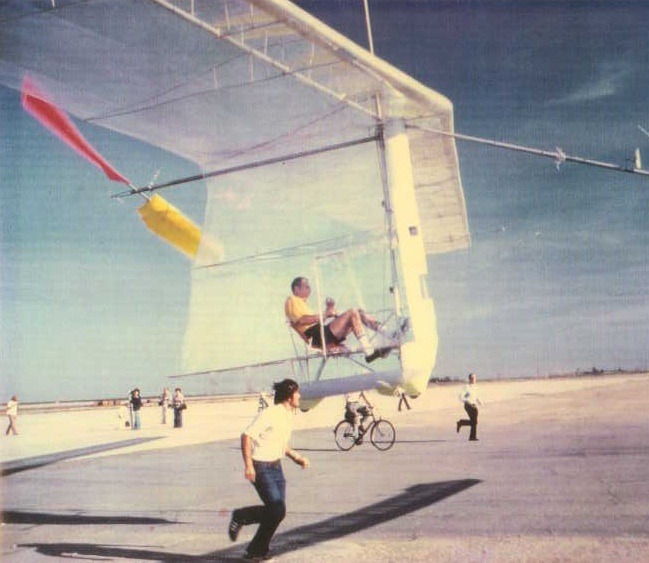 That said, human-powered flight is possible. In 1977, Paul MacCready won the $100,000 Kremer prize for designing the Gossamer Condor, which flew a figure eight, 1 mile-long course. MacCready calculated that a good bicyclist could develop, or generate, one-third horsepower almost indefinitely. All he needed to do was find a design that kept the weight down and provided a huge wing, sort of like a super-hang-glider. 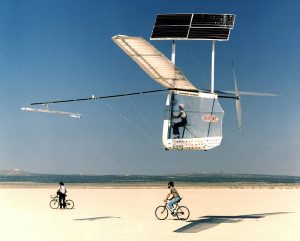 Two years later, MacCready designed the carbon fiber Gossamer Albatross which flew the English Channel and won a new $214,000 Kremer prize. The 22-mile distance was covered in a little less than 3 hours, with a top speed of 18 mph , 5 feet above the waves. Today the Gossamer Albatross hangs in the Smithsonian National Air and space Museum.