self repairing aircraft carriers made from wood & ice

Despite the name, Pykrete isn’t a fictional material from Star Trek but a real substance made from wood chips and ice with strange and fantastical properties that were actually considered for use in building Royal Navy aircraft carriers during World War II, especially for use in the battle of the Atlantic.

The survival of Britain, the only western power opposing the might of Nazi Germany in 1941, was dependant on keeping the lifeline to the United States open so that the flow of food and war materials could keep her fighting. There was therefore a pressing need for aircraft carriers, preferably as large as possible to allow a variety of planes to take off and land and protect the lifeline of vital shipping convoys.

During the Second World War the largest ship afloat was the Queen Mary, 1,000 feet long and weighing 86,000 tons.So when an English inventor, Geoffrey Pyke, came up with plans for a cheap and speedy way of building a ship that was twice as long as the Queen Mary and three times as wide, the Military Chief of Combined Operations, Louis Mountbatten, was very interested to listen to him.

Pyke was a shabbily dressed eccentric who had made and lost a fortune speculating in metals in the 1920s, and turned his mind to a wide range of inventions and innovations. Pyke’s aircraft-carrier scheme used a material invented by a friend, Max Perutz (later to win the Nobel Prize for other researches), which Pyke modestly called “Pykrete”, perhaps an easier name to say than “Perutzcrete”. It was a simple mixture of 86% ice and 14% per cent wood pulp. Pyke demonstrated that the addition of the wood pulp transformed the ice into a kind of ‘super-ice’ which could withstand bullets, resist crushing and easily be planed into blocks and other shapes. 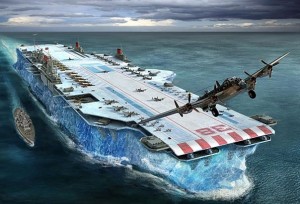 Artists impression of a Pykrete Carrier

The story goes that Mountbatten cornered prime minister, Winston Churchill, in his bath, an occasional venue for important wartime meetings, and dropped a chunk of Pykrete into the bathwater to show its durability.

In spite of the odd nature of the material – and its inventor – Mountbatten set up a project to develop and test the material with the ultimate aim of building huge ships with the intriguing ability to repair themselves after torpedo attacks using on-board refrigeration equipment and seawater. Pyke even suggested that this equipment could be used to spray super-cooled water at enemy ships to ice their hatches shut and freeze their crews to death. 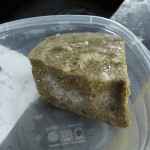 For a year or more the project progressed, with a top- secret laboratory in London and a prototype ship on Patricia Lake in Alberta, Canada. But the pace of the war and the technology of weaponry advanced to the stage where such potential behemoths as Pykrete aircraft carriers were superseded by longer-range aircraft, the destruction of the German U-boat fleet, and the rumoured development of a brand-new weapon, the atom bomb, that was expected to end the war. So unfortunately these aircraft carriers made of wood & ice were never produced.


Below are images from the site, a secret boat-house on Patricia Lake, in Jasper, Alberta, Canada, where a small-size test was organized. Pyke was ecstatic as his materials were assembled into a model of his cold revelation. As a testament to either Pyke’s brilliance or the twisted humor of the universe, the ice ship was a complete success: in other words, it didn’t melt all through a hot summer. 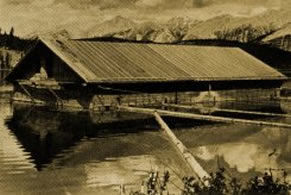 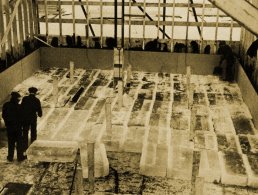