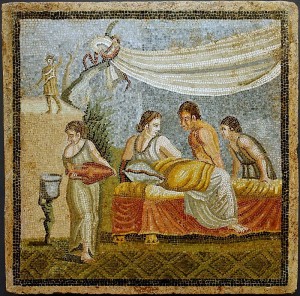 Unlike Guernsey the Roman presence in Jersey is not so clear cut. Even only a few years ago there was such a paucity of evidence that it was commonly assumed they never colonised Jersey at all. In this article we look at some of the new emerging evidence for Roman ‘occupation’ in Jersey or ‘Andium‘ as it was probably know by the Romans.

It is currently believed that the Romans reached Jersey in about 10 BC. However, there is no evidence as yet of a significant Roman presence on the Island until after 50 AD, and whatever part Jersey may have played in the wider Roman world depended largely on its utility as a trading post. Rome’s conquest of Britain, starting with the Emperor Claudius’s invasion of 43 AD, was critical. However, it was Guernsey – known as Lisia by the romans, sited more directly on the sea route from Spain, which benefited most. And Jersey, though probably not as isolated as was previously assumed, may have seen comparatively little of the Romans. 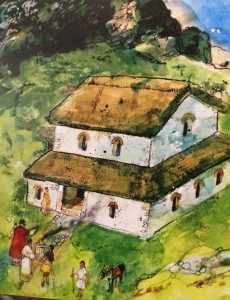 The Roman Fanum at Le Pinacle

Of course that conclusion could alter as more remains of Roman settlement come to light. And the discovery of an early first-century oil jar (amphora) sherd on the Old Street site in St Helier already suggests that the Romans were doing business in Jersey from the start. But no Roman buildings have yet been found in St Helier; nor have they been detected in the recent excavations at St Clement, where settlement continuity has nevertheless been established from the Late Iron Age into the 2nd and 3rd centuries AD. To date, the only Roman building to have been found in Jersey is still the little ‘temple’ (fanum) at Le Pinacle, where a small rectangular stone structure was once tightly walled about by an enclosure of similar plan.

The near-total absence of Roman buildings of any kind was once taken to mean that Jersey was never fully Romanised. And it may still be significant that almost all the Roman coins ever found in Jersey have come not from the heavily wooded inland areas but from the more accessible coastal plains. However, the new St Clement evidence of long-term settlement in Jersey might now suggest that the Island was colonised by the Romans to the same degree as Guernsey; and that all the Channel Islands – Alderney included – were part of the Roman trading system from the conquest of northern Gaul in the first century BC until Rome’s retreat from the Atlantic seaboard on the rise of the Merovingian Franks.


Using ‘Lisia’ and ‘Riduna’ as Models 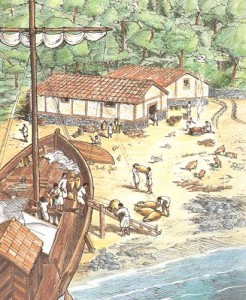 How that system operated is best seen in Guernsey, where the excavations at La Plaiderie and on the site of the Bonded Stores have begun to show St Peter Port as a busy and fully functioning Roman town.

Warehouses of the second and third centuries AD have been found at La Plaiderie; there were Roman workshops and other buildings at the Bonded Stores. At both sites, finds have included clay Venus figurines as evidence of religious practice; there is good quality vessel glass and many sherds of Samian (the favoured tableware of Rome); there are writing materials, engraved finger-rings, and thousands of other potsherds from across the Roman world, dating from the first to the third centuries AD. For more information see our article on Roman Guernsey.

Closely comparable to that material are the finds from Longis Common in Alderney – known as Riduna by the romans, where there was another self-sufficient Roman settlement. And next to the Longis site are the remains of a fourth-century coastal fort, built – like the much larger forts of Roman Britain’s Saxon Shore – for protection against the growing threat of piracy. (see our article on Roman Alderney for more information.


The End of Roman Influence 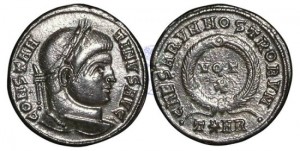 In Jersey as well as Alderney, there are indications that not everything was well and by the 4th century Roman coins are a rarity in Jersey. However, they include an important hoard from the Quennevais, buried (on latest-coin evidence) in or shortly after 354, but otherwise made up largely of Constantinian folles of as much as half a century earlier. Piracy may be the reason why the coins were hidden. But whatever the explanation, the hoard’s unusual profile suggests a slowing down of economic activity as the Romans withdrew, and that they had probably departed the Island by the mid-century at latest.

It is easy to paint the Dark Ages as darker than they really were. However, it is certainly the case that there is very little surviving evidence of what happened in these centuries, whether in Jersey or the other Channel Islands. Jutes, Frisians, Angles and Saxons – and perhaps the Vandals also – may all have raided the Islands in the fourth and fifth centuries AD. And fugitive Celts (Britons) from Wales and Cornwall probably landed in Jersey on their way to Brittany, some of whom may have decided to settle there. If they did, they would have become subject eventually to the Merovingian (‘long-haired’) kings, whose domination of Western Gaul (Francia).