The Bayeux Tapestry is an historical artifact that never fails to impress depicting as it does such a pivotal moment in British and Channel Island history, that of the invasion & conquest of England by William the Conqueror in 1066. The vibrant colours and the way it is displayed means that you can be literally centimeters away from a beautiful artifact that’s nearly a thousand years old. It excites the imagination into imagining the events it depicts.

The Story in Brief

The tapestry tells the story of the adventures of Duke Harold Godwinson, brother-in-law of King Edward the Confessor, who was shipwrecked in Ponthieu in 1064. Following his rescue by William, Duke of Normandy, Harold is shown swearing to support William in his quest to succeed Edward the Confessor as King of England – a promise which he was later to break. We then see Harold returning to England and being acclaimed as king after Edward’s death.

Next we see William’s preparations for the invasion of England and the decisive Battle of Hastings. One of the most striking images is the one that depicts the slaying of Harold with an arrow through his eye. However it’s not known for sure if this is really Harold it may just be that his name happens to be next to this charcater he he may in fact be one of the other figures.

The tapestry approaches this piece of history from the Norman perspective, attempting to justify the invasion launched by William to claim what he believed was rightfully his. The image of Harold that the tapestry projects is one of a double-dealer who broke a sacred promise to William.

One interesting and intriguing thing of note is the tapestry borders. There are two of them, upper and lower. Both are filled with mythological figures, lions, dragons, farming and hunting and scenes from Aesops fables. The significance of the scenes has been debated and there are views that believe the themes of deceit, and unlawful possession in the fables have been used as a vehicle by the English embroiders to express their dissent and horror of the Norman invasion of Britain. But we’ll never know for sure.

However, look closely and you will come across oddities that are hard to explain. Mysterious characters, some named, some not, appear in the main body and borders. Add to that some of the cuirious rather theatrical gestures they appear to be making and there emerges a sense of mystery rising like a mist from the aging cloth.

Most of these gestures can be explained and for some we have to go back even further in time to Roman and Greek antiquity to uncover their meaning and bring to the surface more subtle meanings than you would at first suspect. Medieval people would have understood the nuances and meanings that are now lost to our modern minds.

Hands with outstretched fingers clearly separated from the thumb indicated awe or respect to a superior, such when the messenger who informs William of Harold’s capture and when Harold approaches King Edward after his return from Normandy. 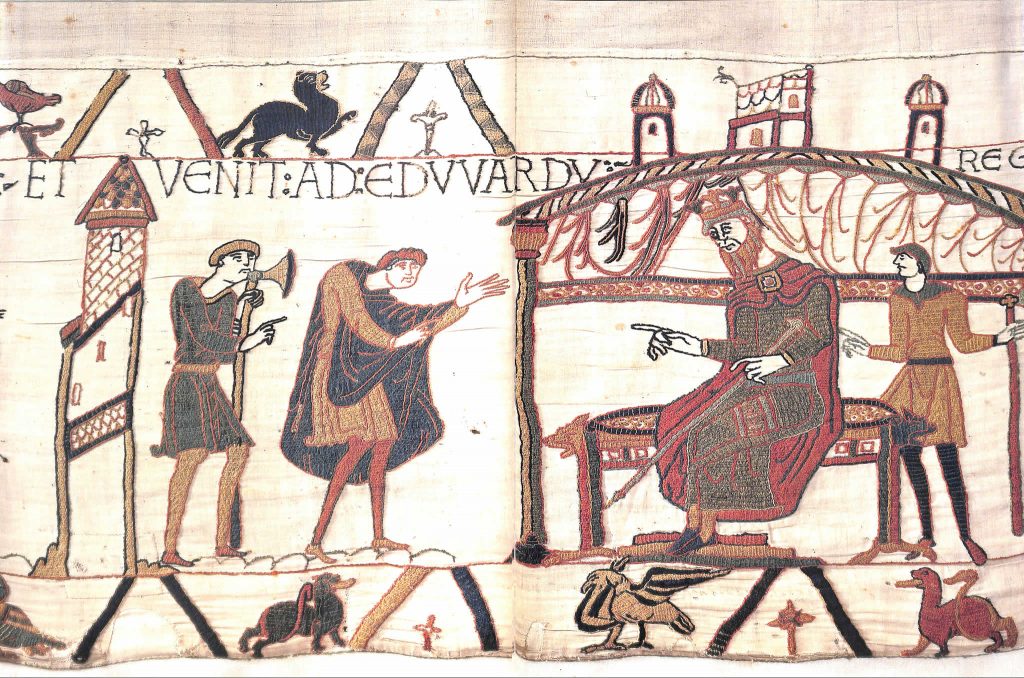 A closed fist with only the little finger pointing was the sign of a eavesdropper, Just like Harold ‘s servant who escapes to tell William of his master’s capture. 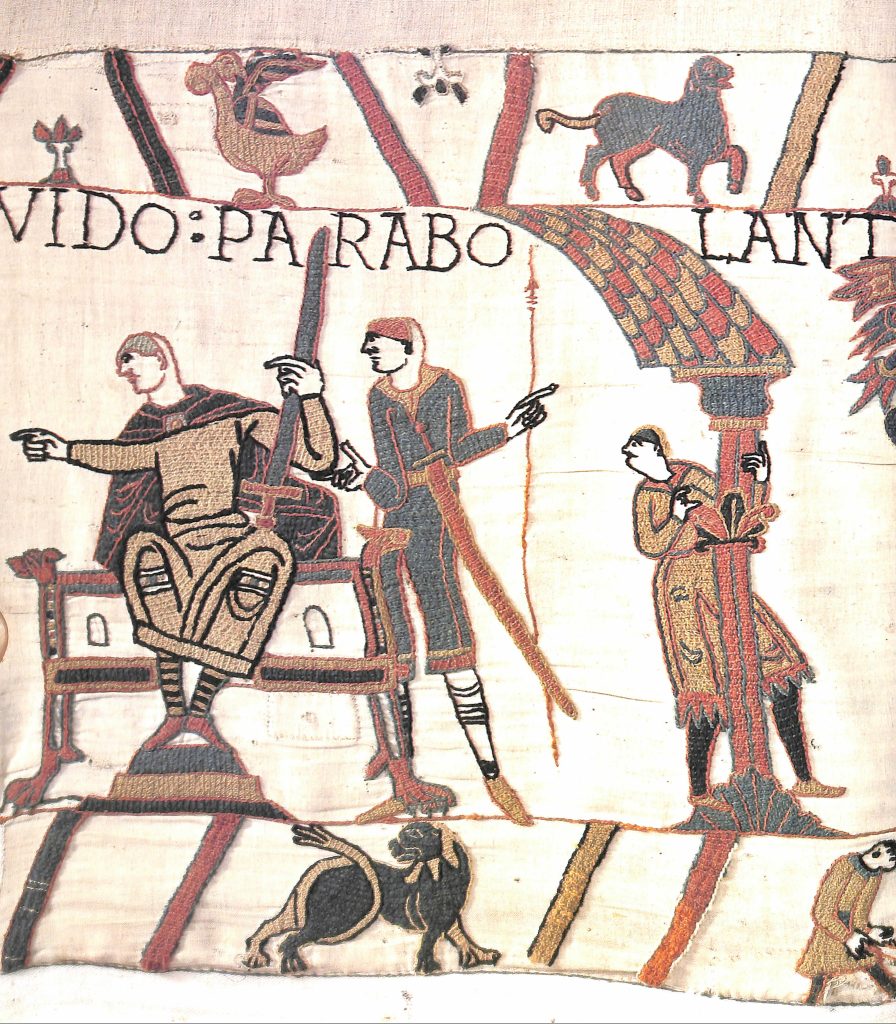 The Roman gesture for grief or mourning was touching the face, just as Edith does with her veiled hand at Edward’s deathbed. 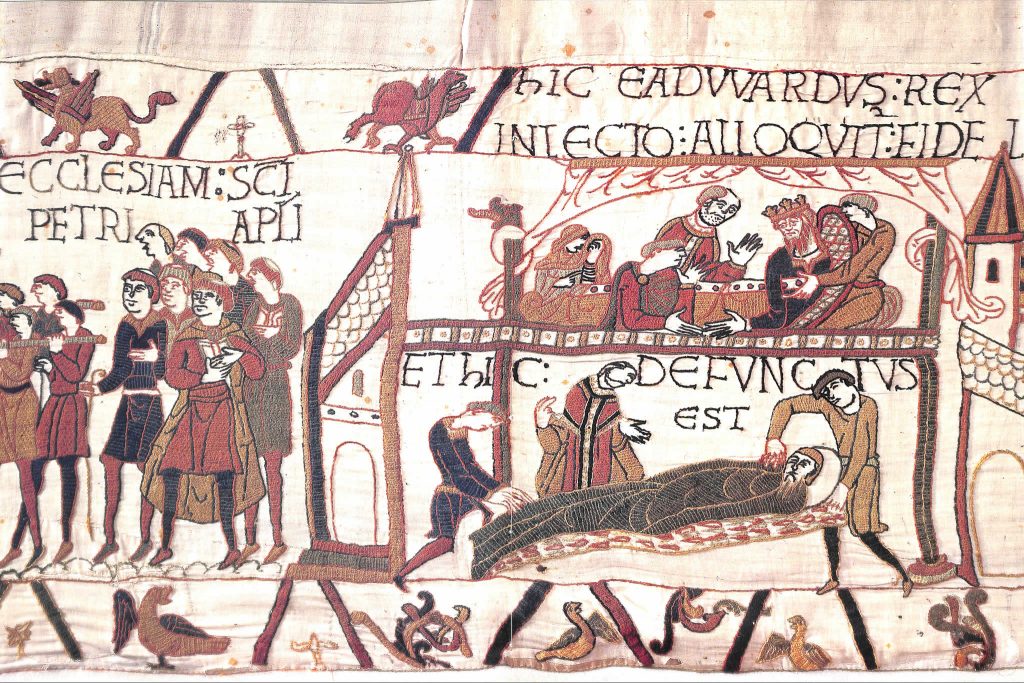 Mysteries within The Tapestry

One such enigmatic scene shows us a woman with an English name, Ælfgyva, and ‘a certain cleric’, It may represent rape or adultery; the cleric may be making a pass, or slapping the woman for having impure thoughts or for being a witch, The possibilities are endless, but the explicitly male naked figure in the border below perhaps suggests a sexual subject, An unconvincing attempt has been made to identify the lady with Queen Ælfgyfu, wife of Æthelred II. The scene which must have meant something to the contemporary audience and may even refer to some well known scandal of the time. So in the absence of further evidence, it is probably forever lost to us. 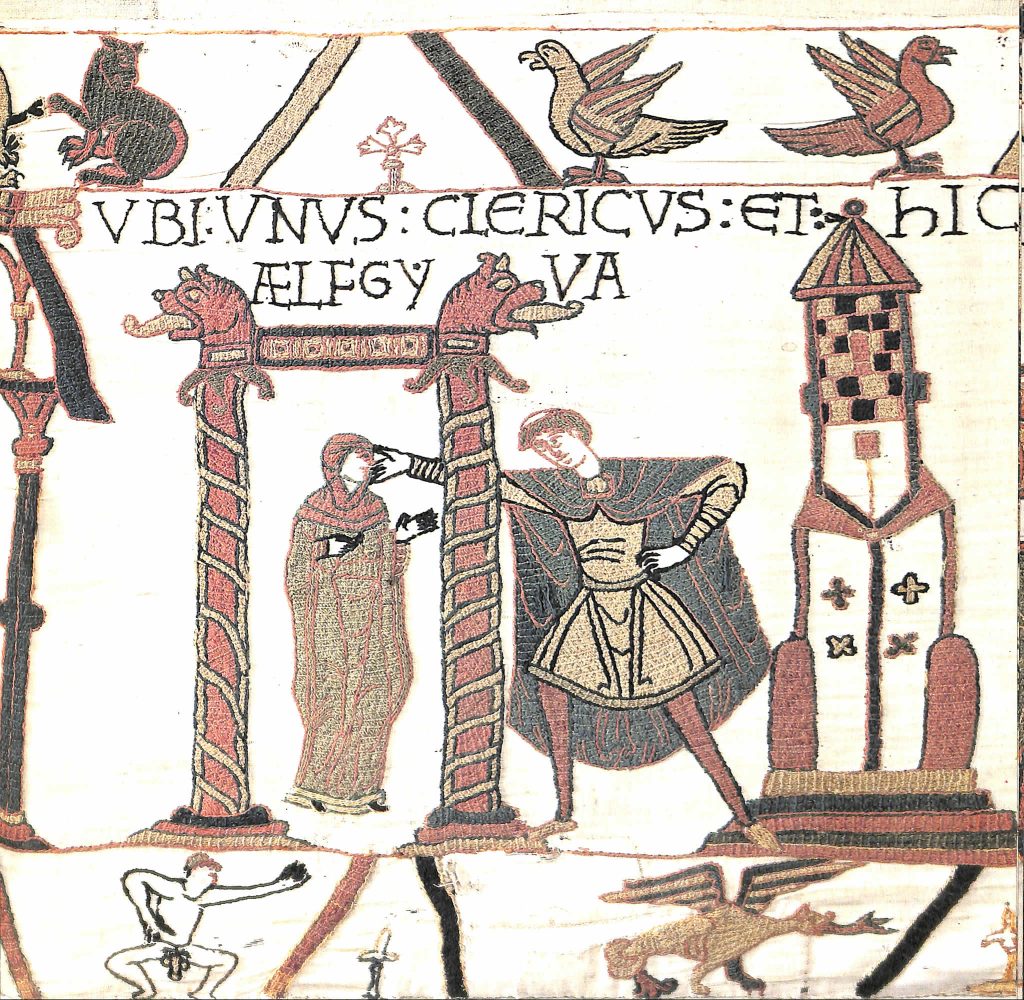 One finger pointed at the person’s own face meant surprise, as when Harold receives the news of the comet. 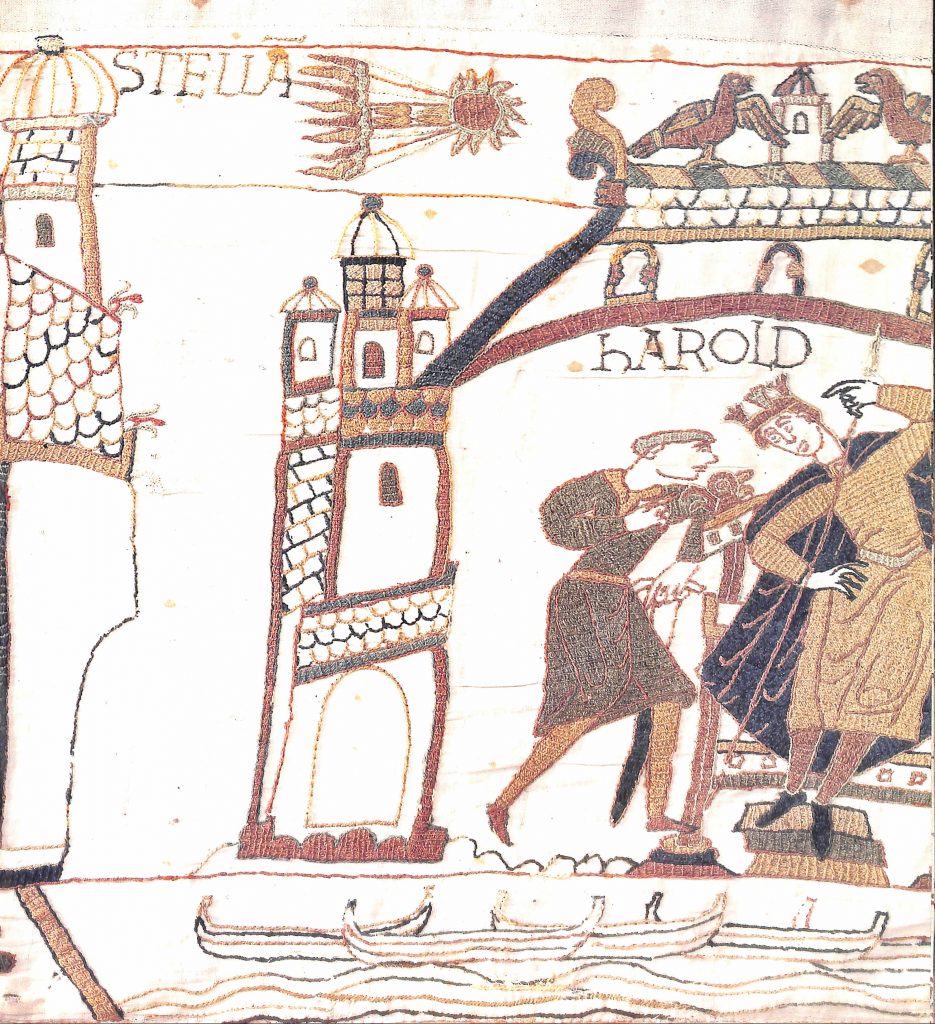 When someone pointed one finger at another character, this showed that it was the latter who was speaking: this works consistently throughout the Tapestry. When Harold and Guy confer, they point at one another, which is unnecessarily re inforced by the inscription Where Harold and Guy are talking. In the adjacent scene, the two messengers point at Guy to prove that he is refusing to hand over his captive. At Harold’s oath-taking, all three witnesses point at him, evidence that he is speaking false words. On his return to England, he adopts the posture of apprehension, while the pointed fingers of Edward and an attendant indicate they are listening to his account of the fatal mission.

Giving a Sacred Command or Oath

People in the Tapestry seldom touch one another. If they do, it is evidence of a Significant relationship. When someone’s finger makes contact with that of another, this means a sacred command has been given, for the motif originated in the gesture of Christ healing. Edward touches Harold twice in this way, to send him on his mission at the start of the story and to pass on the succession in the deathbed scene.

We also see this again in the swearing of Harold’s oath over the Holy relics where we can see onlookers touch their lips as the sacred words are spoken. 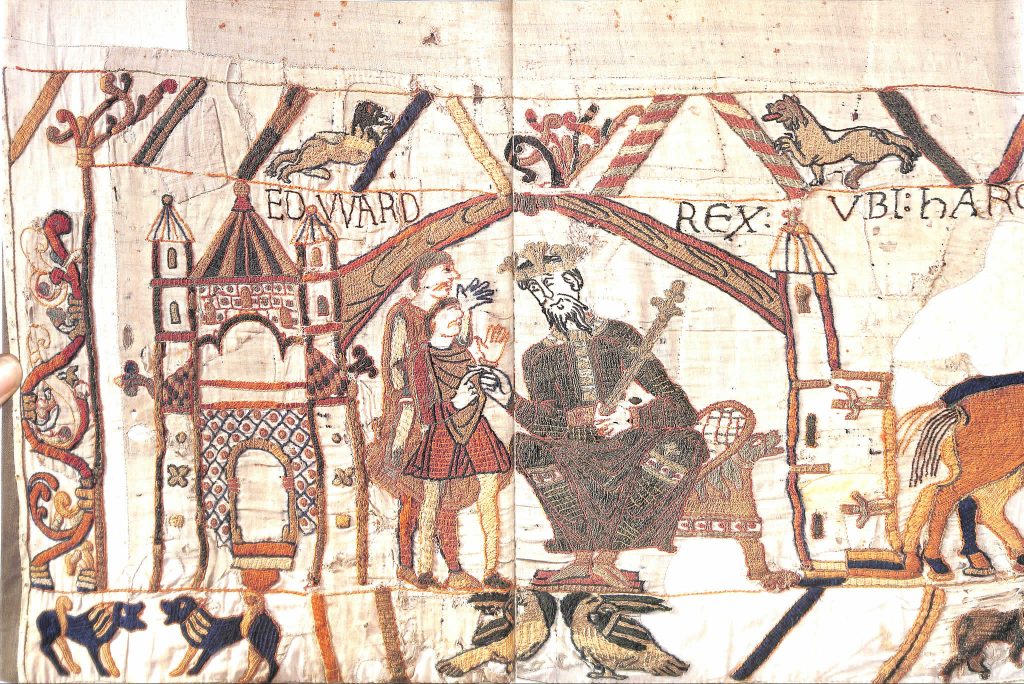