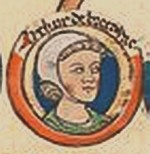 History can often turn on the actions of a single individual. April the 3rd 1203 was such a day when King John committed murder. If he hadn’t committed this heinous crime then the whole history of Guernsey and the Channels Island could have been radically different. Guernsey today may not have been an independent Crown dependency, we may not even have been British but French. We could have participated in the French wars AGAINST England OR conversely Normandy could still be part of Britain – such are the possibilities from the musings on the “what if” of this event.

The four eaglets, as they were called, sons of King Henry II of England, were Henry, Richard, Geoffrey and John. The first died while great Henry was still alive, as did the third, Geoffrey, but not before marrying and producing a son christened Arthur.

In 1189 Henry II died, hounded by his son Richard (the LionHeart), who inherited the throne. But Richard’s reign was brief, and just ten years later John was crowned after Richard was killed besieging an enemy castle. So John was King, but his nephew Arthur, then a boy of thirteen, was being raised in the courts of France. 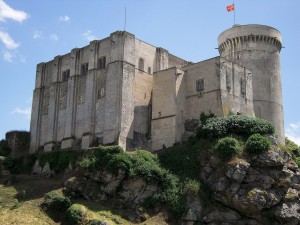 The castle of La Falaise in Normandy

By 1203 John was already hated by most of his subjects, and he could no longer ignore his dangerous nephew who had begun to sound his own claims to the throne.

By a fluke of luck, John captured Arthur in a minor battle. First, he imprisoned him at the castle of La Falaise in Normandy, then he moved him to a fortress in Rouen. But no matter where he was kept, Arthur continued to be a threat, one that John had to eliminate.

According to a contemporary source :

‘On the day before Good Friday, after dinner, when he was drunk with wine and filled with the devil, he [John] killed him [Arthur] with his own hand and, tying a heavy stone to his body, threw it into the Seine. Later it was dragged up in the nets of fishermen and … was identified and secretly buried in Notre Dame des Pres … for fear of the tyrant.’

The date was 3 April 1203. John the murderer remained King, unpunished and unrepentant, until his death thirteen years later.

King John was a cruel and inept ruler and his mismanagement led directly to war with France and his eventual defeat by King Philip at Rouen 24 June 1204 – just over a year after he murdered his nephew there. Rouen was then the centre of the Norman government and, its surrender in June 1204, meant that his Lordship of the Channel Islands technically passed to France. Indeed, subjects of the King of France were already occupying the Islands, which then briefly belonged neither to John’s England nor to Philip Augustus’s conquered Duchy of Normandy. Guernsey’s constitutional, administrative and cultural evolution had begun and the island’s unique identity had been born – BUT what if Arthur had been king ? The question will forever remain hanging in the air unanswered.