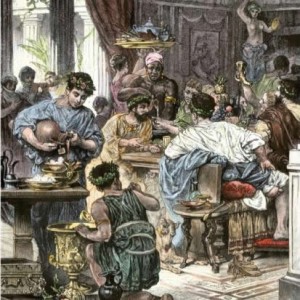 Archaeologists exploring sewers and cesspits at Herculaneum in 2013 made the startling discovery that, contrary to the long-held belief that ancient Romans survived on a basic diet of bread and olive oil, they in fact enjoyed a rich variety of fish, fruit and spicy dishes along with the more ‘exotic’ Dormice, ostrich meat and fresh fish. In this article we take a look at some of the ancient Roman culinary habits.

We often think of the Mediterranean triad – bread, wine and olive oil – as the diet of most Romans, but in fact food in ancient Rome was much more diverse. And within each food type there was a range of goods suited to fit every financial budget: cheap local plonk or expensive Falernian wine from the Bay of Naples; home grown pot-herbs or exotic seasonings from India, and traditional salted pork or the coveted salted tuna from Spain. Consumption practices in ancient Rome, too, ranged from the traditional to the truly exotic.

Conversely, another myth surrounding Roman food and eating practices claims the Romans held elaborate banquets where bears, smelly fish sauce and even dormice were eaten. The exaggeration and perpetuation of these stories is primarily due to the fact that the Romans themselves were, on occasion, both fascinated and disgusted by their own eating habits, and so wrote them down.

The works of these ancient authors, usually elite men, were then copied by monks in the Middle Ages and Renaissance periods, and have eventually found their way to us: today, for example, you can buy recipe books based on the works of Apicius. Although the real Apicius lived during the 1st century, the recipes are actually a compilation that was published sometime during the 4th century AD. Here’s one of the recipes for a sauce to serve with boiled ostrich meat:

“Pepper, mint, roasted cumin, celery seed, long or round dates, honey, vinegar, passum (raisin wine), liquamen (fish sauce) and a little oil. Put in a pan and bring to the boil. Thicken it with starch and in this state pour over the pieces of ostrich on a serving dish and sprinkle with pepper…”

Are the ingredients in these recipes really what people in ancient Rome and Italy were eating? You may be surprised to find out that the answer is …. yes.

For centuries the foods and recipes discussed by ancient authors were all the information we had about Roman diet. More recently, the field of environmental archaeology, which includes the sub-disciplines of archaeobotany and zooarchaeology (the study of ancient plant remains and animal bones respectively), has been able to provide us with a wealth of new information: bones and soil samples collected during archaeological excavations in places such as Pompeii and Herculaneum have led to the recovery of foodstuffs such as fish bones, peppercorns and mint seeds. Consequently, we are now able to discuss with much more precision the diet in ancient Rome and Italy.

As the centre of an enormous empire, Rome attracted goods and foods from the provinces and beyond. In theory it was possible to either purchase or import even the most exotic goods, such as ostrich. The Romans had very few food taboos, so anything could be tried at least once. Yet, similar to many other ancient societies, what you ate in ancient Rome depended upon what you could afford.

An archaeologist crawls through the ancient sewer

An Archaeological team sifts through piles of ancient excrement

WHAT WAS AVAILABLE & to WHOM IN ROME ?

Only the wealthiest inhabitants were able to pay for exotic meats, and even then, they probably ate them only very rarely. More affordable – and far more common – meat included sheep, goat, chicken, and especially pork. Fresh meat, which was expensive, came from animals brought in from the surrounding countryside and butchered in the city. Salted pork, because it could travel farther and preserve longer, was less expensive, and would have been the type of meat consumed by all but the very poorest. 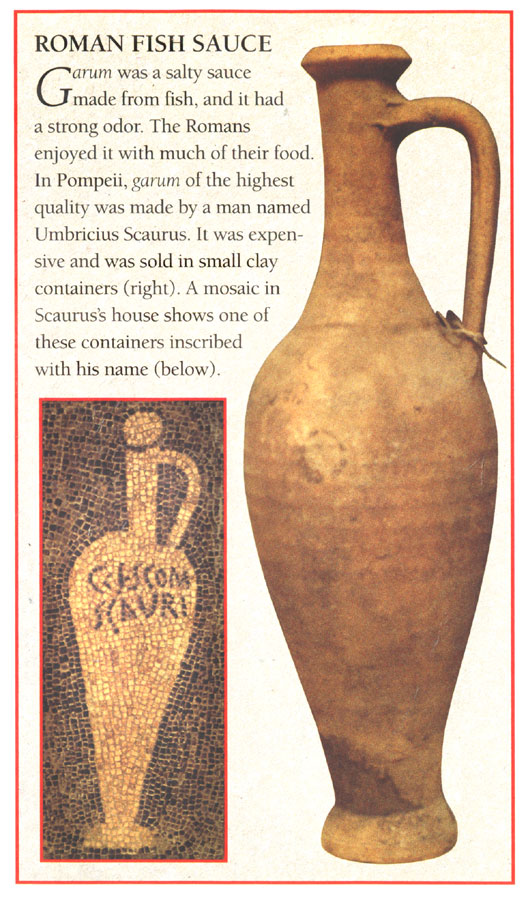 Fresh fish would have been similarly expensive, as it had to be brought up the Tiber from the sea each day. Salted fish, or the famous Roman fermented fish sauce (liquamen or garum), would again be much more common and inexpensive. Fish sauce was not made in Rome, but was imported in large ceramic vessels called amphorae from Spain, North Africa and even the Black Sea.

Fresh fruits and vegetables came from Rome’s hinterland, and were brought into Rome to be sold in markets. Price fluctuated based on what was in season, but in general, the most popular fruits were grapes, olives, figs, apples, pears, pomegranates and blackberries. Peaches were an expensive fruit, only introduced into Italy in the mid 1st century AD. Common vegetables included cabbage, onion, garlic, lettuce and leeks. Moreover, people could buy several different types of nuts, including hazelnuts, walnuts, chestnuts, almonds and pine nuts.

Thus far, this description of food in Rome could probably be applied to any city in Roman Italy. Yet unlike many small towns and cities, Rome’s size made it a logistical challenge with regards to food supply: in the 1st century AD, Rome had a population of approximately one million people, and it had grown too big to be supplied exclusively by its hinterland.

Traditionally, the staple of the Roman diet was wheat: large bakeries in Rome’s port town, Ostia, attest to the fact that most Romans ate much of their wheat as bread. And we know from ancient texts and inscriptions that grain was imported in huge ships from Egypt and North Africa.

Yet food finds from Herculaneum, a city on the Bay of Naples destroyed by the eruption of Mount Vesuvius in AD 79, suggest the Romans ate more than just wheat. At Herculaneum there is evidence of the consumption of both foxtail and broomcorn millet, and the different quantities of wheat and millet finds indicate that while wheat was often turned into bread, other cereals (including emmer wheat) were eaten as a porridge or stew. The Romans also ate lentils, chickpeas, beans and peas. The Murecine tablets [a collection of wooden writing tablets, found in a villa just outside Pompeii in an area now called the ‘Agro Murecine’], also buried during the eruption of Vesuvius, record that many of these pulses were imported from Egypt.

As we do today, Romans included a multitude of seasonings in their dishes: cumin, coriander, sesame and mint seeds have been found in Herculaneum, as have dill, fennel and poppy seeds. In fact, the Romans went to great lengths to flavour dishes. Black pepper, which has also been found in Rome, Herculaneum and even Roman London, was imported from the south-western coast of India in Roman times. In a journey that took several months, the black pepper was shipped across the Indian Ocean, up the Red Sea, along the Nile to Alexandria before being put on a boat and sent to Rome. It appears in many of Apicius’ recipes, including the one below for sea urchins:

“Take a new porridge pan, add a little oil, liquamen, sweet wine, ground pepper; bring it to heat. When it is simmering put the sea urchins in one at a time. Stir them and bring them to the boil three times. When they are cooked, sprinkle with pepper and serve.”

Every single item in the above recipe can be attested to archaeologically: all the ingredients were recovered from a single sewer that ran beneath a shop and housing complex inhabited by those of moderate means in Herculaneum – yuck!


Finally, while the Romans really did eat dormice (although how often is debated), dormice are not the same species as the small white mice that get into your house and scurry across the floor today!