Home » General Interest » The Evolution of the English Language

The Evolution of the English Language 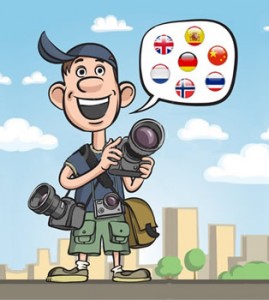 English is truly the international language of the world. It’s rise to prominence is due in no small part to the British Empire and now to the all pervading American cultural hegemony.

But what about the evolution of the language itself ? As with any ‘living thing’ its’ evolution has been somewhat chaotic, absorbing and assimilating many different other European languages and dialects, as well as languages from around the Empire, most notably Hindi. Below we take a more light-hearted look at how it has evolved.

The Evolution of English : A Timeline

A look at what words the Anglo-Saxons and Vikings bought to the English language.

In 1066, William the Conqueror invaded Britain and bought with him fancy French words to add to the English language.

Did you know that Shakespeare invented over 2000 new words and phrases such as eyeball, anchovy and puppy.

In 1611, the new King James Bible was created and gave us many famous phrases.

5. THE ENGLISH OF SCIENCE

During the 17th Century scientific revolution, new science words were created such as acid, ovary and tonsil.

Exploring how the British Empire spread across the world bringing back many new words and phrases.

7. THE AGE OF THE DICTIONARY

A look at how lexicographers started creating the Dictionary of the English Language to ensure that everyone spelt words correctly and knew their correct definitions.

It may surprise you to know that some American words were actually English to start with.

The future of English and the many hybrids that have been created. Should we still call it English?