The founding of the Eternal City – Rome – Fact & Fiction

On the 21st April 753 BC, according to Plutarch, the city of Rome was founded.

The tale starts at Alba Longa, a town about twelve miles south-west of Rome. Virgil tells us that Aeneas, a Trojan who escaped from Troy after its fall, established the tribe that lived there. Years later, Alba Longa’s King Numitor was betrayed by his brother Amulius, who seized the throne and forced Numitor’s daughter Rhea Silvia to become a Vestal Virgin to preclude her producing a child to threaten his rule. However Rhea Silvia was less virginal than her order would have liked. Seduced by the god Mars, she produced twin sons, Romulus and Remus.

When Amulius learned of the birth he imprisoned poor Rhea Silvia and ordered her twins to be drowned in the Tiber. But the man who should have drowned them took pity instead and left them in a shallow trough that floated down the river until they reached the spot where Rome now stands.

Here, according to legend, Romulus and Remus were suckled by a she-wolf until they were found by a farmer, who raised them. In time they returned to Alba Longa thirsting for revenge. They succeeded in killing their uncle Amulius and restored their grandfather to the throne. 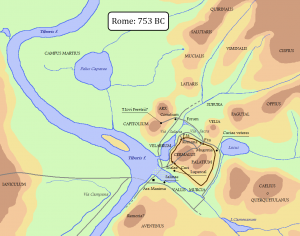 Having satisfied family honour, they returned to the exact place on the Tiber where the she-wolf had found them, and founded Rome on 21 April 753 BC. Romulus’s career did not end there, although Remus’s shortly did, as his brother killed him in a dispute over a city wall. Romulus became King of Rome and later organised the rape of the Sabine women. But he never died. One day he mysteriously disappeared in a storm, and Romans believed he had been turned into a god.