The Four Stages of Public Opinion

Humans are a fickle lot. You only have to look at how public opinion seems to swing wildly from day to day or the daily diet of fake news we either choose to believe or ignore as well as the ‘real news’, which again we seem to believe or discount on a whim.

So, it might come as rather refreshing to hear how British biologist, Thomas Henry Huxley, 150 years go made a rather pithy observation called “The Four Stages of Public Opinion”. Maybe it will ring true for you 🙂

Huxley was a firm believer that “magna est veritas et praevalebit” (truth is great and will prevail) but, as he drolly remarked,

‘truth is great, certainly, but considering her greatness, it is curious what a long time she is apt to take about prevailing‘

He expanded upon this sentiment in a notebook jotting regarding ‘The Four Stages of Public Opinion’. It’s hard to disagree with his analysis.

I (Just after publication)
The Novelty is absurd and subversive of Religion and Morality. The propounder both fool and knave.

II (Twenty years later)
The Novelty is absolute Truth and will yield a full and satisfactory explanation of things in general. The Propounder man of sublime genius and perfect virtue.

III (Forty years later)
The Novelty won’t explain things in general after all and therefore is a wretched failure. The Propounder a very ordinary person advertised by a clique.

IV (A century later)
The Novelty is a mixture of truth and error. Explains as much as could reasonably be expected. The propounder worthy of all honour in spite of his share of human frailties, as one who has added to the permanent positions of science.


It’s worth noting that the Swiss palaeontologist Louis Agassiz (1807-1873) made a similar observation when he said, ‘Every great scientific truth goes through 3 stages. First people say it conflicts with the Bible; Next they say it had been discovered before; Lastly they say they always believed it’.


Seems like nothing changes and people over 100 years ago were just as capricious as we are today! 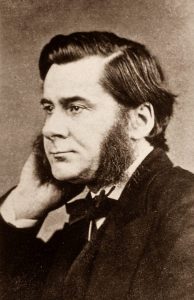