The Guernsey cow is a truely unique and prized member of the cattle family. It has a world wide reputation and milk from the breed is used in many countries to blend with weaker less fatty milk and cream from other breeds. It’s importance in the cattle world cannot be over emphasised and how such a small island as Guernsey came to produce such a unique and valuable breed is every but as intriguing as the breed itself 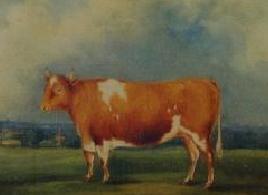 "The Guernsey Steer" - Earliest known painting of a Guernsey cow 1841

The exact origins of the breed is not known and is lost in the mists of time. However it is believed to be descended from 2 breeds brought over from nearby France, Isigny cattle from Normandy and the Froment du Léon from Brittany.The Guernsey was first recorded as a separate breed around 1700 and in 1789, imports of foreign cattle into Guernsey were forbidden by law to maintain the purity of the breed although some cattle evacuated from Alderney during World War II were merged into the breed.

So what’s so special ?

The qualities as the producer of an unique golden coloured milk high in Protein and Butterfat and rich in flavour made The Guernsey the envy of the emerging dairy industry of the nineteenth and early twentieth centuries.

Today, dairy farmers in Europe and the Americas, in Africa and Asia, in Australia and New Zealand all know the advantages of the Guernsey as a competitive dairy cow, able to effectively and efficiently maintain a profit wherever she is found

Exports of cattle and semen were for a while an important economic resource for the island and in the early 20th century a large number of Guernsey cattle were exported to the United States.Today the breed is well-established in Great Britain, the United States, Canada, South Africa and elsewhere.