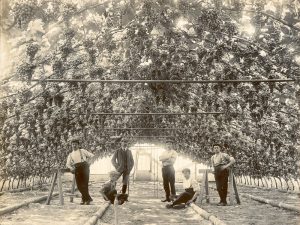 Guernsey’s historical pre-eminance as a horticultural centre for tomatoes is well known. Less well known is Guernseys cultivation of table grapes, which at one time was THE main export industry.

The remnants of this industry can still be found in the language of your average ‘guern’ today – who often refers to greenhouses exclusively as vineries – even though its many decades since they grew any grapes.

Towards the end of the 18th century the cultivation of table grapes in Guernsey developed from humble beginnings into a major export industry. The skills of the local boat builders and carpenters were put to good use with the design and construction of glazed wooden “lean-tos” which were traditionally erected against gable walls of farm houses and cottages around the island. 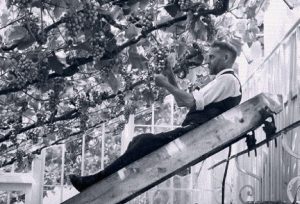 These early lean-tos were unheated, relying solely on the sun to heat the air space under the glass. This system was improved later on with the introduction of cast iron heating pipes that would carry hot water through the grape-houses allowing heat to be given off. This was a crucial development in the expansion of the grape industry on the island as it enabled the grape growing season to be extended into the shoulder months of the year which were much colder. Normally this would have been impossible as low sunlight levels and insufficient heat would have stunted the growth of the grapes.

With the introduction of piped water heating the growing season of the crop could be artificially extended which, in turn, meant better financial rewards for the Guernsey growers.

A lean-to could run anywhere from 30 ft up to 100 ft in length and would comprise of a low granite wall along with a sloping timber frame built from the top of a high wall (or gable wall of the house ) down onto the granite wall and glazed panes of glass.

The vines were actually planted outside the lean-to and grown through holes in the low granite wall. This was a deliberate act which enabled the plant to take-up moisture and nutrients from a large soil area outside the lean-to whilst having the benefit of growing all its trunk, foliage and fruit under the warmth and protection of the glass.

The Industry Takes Off 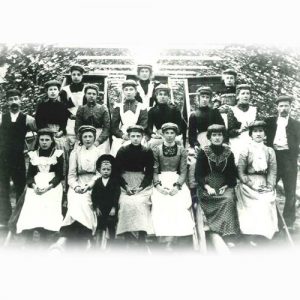 As the grape industry developed beyond simply supplying the local market demands, growers began exporting the fruit to England. Paddle steamers, and later screw steamers, shipped wooden crates containing the wicker baskets of grapes across the Channel to ports such as Southampton and Weymouth from where the produce was taken by rail to markets across the country.

As the grape industry grew in size with the demands from mainland markets growers on the Island expanded their growing methods. The local boat builders and carpenters again came to the fore by designing and building full span greenhouses in which to grow the vines.

The process of cultivating the vine was a dedicated and laborious one. In order to maximise the crop a process of “thinning out” had to be undertaken as the vines grew. This was designed to reduce the number of leaves and remove new shoots from the plant so that the vine would put all its energy into swelling the fruit on the bunches of grapes that were already formed. This process was extremely time consuming and was often performed by women or boys because they had small hands and could reach in amongst the foliage and cut out the shoots with tiny pairs of scissors.

When ripe the fruit was picked very carefully to ensure that the fine white “bloom” on the surface was not rubbed off. Growers would ensure that during harvesting the grape bunches were only handled by their stalks and were laid on coloured tissue paper in the wicker baskets to prevent bruising and rubbing. This would ensure that the fruit would travel safely and arrive at its market destination in the best possible condition – commanding the very best price.

The export of grapes from Guernsey was eventually superseded by the tomato which began its life as a secondary crop being grown at certain times underneath the vines to give growers a little extra income and variety. It proceeded to become an export industry which shipped out millions of trays of fruit each season and upon which the Island’s economy relied for £100,000s of income for almost 100 years.