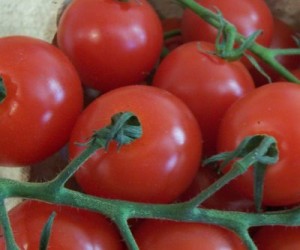 The Guernsey tomato was a mainstay of the island’s economy from Victorian times right up to the 1970s and renowned throughout Europe for its quality and flavour. Sadly the ‘Guernsey Tom’, as it became affectionately known, went into terminal decline to the point where it only forms a very minor part of the Guernsey economy. We look here at this remarkable fruit and its enduring link to Guernsey

Horticulture has always been a mainstay of Guernsey’s economy, thanks to the island’s favourable climate. In fact, at one stage Guernsey could’ve been described as the “glass island”, with 7% of its total surface area under glass by 1950, much of which was growing the “Guernsey Tom”.

Just when the tomato first arrived in Guernsey is unknown. The tomato was brought to Europe in the 1500s but was only grown as a decorative plant as the fruit was believed to be poisonous.

Around 1864 an English newspaper published a story claiming research had shown the tomato was not only edible, but had health benefits. Only a year later, in 1865 a few growers were already exporting tomatoes.

By the 1870s the tomato was being grown commercially on the island, soon replacing the more traditional vine in many Guernsey glasshouses. 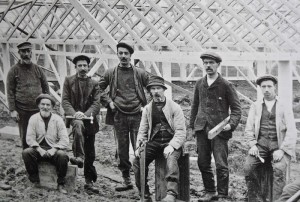 However Guernsey’s new crop was soon beset by problems, as soil-borne diseases like “Verticillium Wilt” took hold, causing plants to wilt and die. A remedy was quickly needed to stop the spread of these diseases, and several methods were tested in the early years with limited success, from “drenching” the soil in carbolic acid and water, to pouring boiling water over the ground.

The real breakthrough came in 1902, when a Guernsey grower Mr Poat, inspired by what he had seen in other, made his first experiments in soil steaming – by baking soil in his mother’s oven! The plants subsequently raised in this soil were healthy, and over the next few years, through trial and error, developments were made which allowed larger quantities of soil to be sterilised by heat. 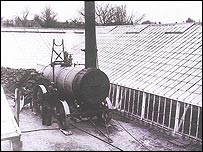 Boiler used to steam the ground

Various methods of soil steaming were developed over the years, the most common method probably that of using “grids”, whereby steam was piped from the boiler into metal grids buried up to 18 inches deep in the greenhouse soil.

Guernsey tomatoes were originally packed in wicker baskets lined with different coloured tissue paper to define the different grades of fruit. These were exported primarily to England and the empty wicker baskets shipped back to Guernsey for re-use. Wooden chip-baskets later replaced the wicker.

Thus by the early 20th century, the Guernsey grape growing industry slowly gave way to the production of the Guernsey tomato and as Guernsey ship building began to fall into decline, Guernsey carpenters and boat builders diversified into greenhouse construction.

The Guernsey Tom was to play a tragic part in Guernsey’s history when on the 28th June 1940, despite being demilitarized by the British, 3 German bombers attacked Guernsey’s St. Peter Port Harbour believing that the tomato export trucks lined up on the quay were in fact military vehicles. This resulted in 33 deaths and 67 injuries.

The Guernsey Tom continued to expand and was grown by a majority of the growers on the island. At its peak there were approximately 2,000 growers on the island producing tomatoes. By the late 1960s nearly half a billion tomatoes were picked and exported to England. Each one of those had to be handpicked, packed and shipped out.

At its height Guernsey provided the UK with 15% of its round tomatoes.

By the 1970s, the tomato industry was on the decline. Increased competition from Dutch producers, and changes in the British railway system, made the export of tomatoes less profitable, and Guernsey’s growers were forced to diversify to survive. The hey-day of the Guernsey Tom was over. Although some tomatoes continued to be grown on the island alongside newer crops like peppers, aubergines and even kiwis, it was nothing to compare to the millions once exported from the island every year. But the “Guernsey Tom” still lives on in popular memory… gone but not forgotten.

Although some Guernsey growers have moved production to other fruit, vegetables and flowers, a lot of Guernsey’s vineries have fallen into disrepair and derilication and the days of the Guernsey tomato industry have sadly faded into nostalgia.

Today there are just 5 commercial growers left whereas there were once about 2,000.