Home » General Interest » The most famous Romance of the Middle Ages : Abélard & Héloise

The most famous Romance of the Middle Ages : Abélard & Héloise 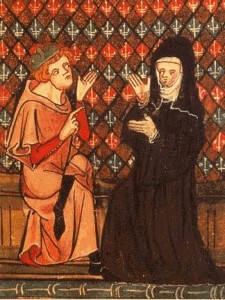 The cult of celebrity may be a modern phenomenon but the interest in the love lives and romances of others has always been a human curiosity. If the innumerable gossip magazines of today had existed 860 years ago they would no doubt have been full of the lurid details of one of the most famous and tragic romances in history; that of Abélard & Héloise.


“Sweet as cinnamon were her embraces”, wrote Pierre Abelard of his beloved mistress Héloise, and the romance of Abélard and Héloise still speaks to us today across almost nine centuries.

Abélard was born in Brittany near Nantes but went to study in Paris at the age of twenty. A master dialectician, his brilliant mind and impassioned oratory soon won him the mastership of Notre Dame. When he was in his early 30s he established his own school just outside the gates of Paris, drawing a large number of admiring students. For this Abélard is considered to be the founder of the University of Paris.

Shortly, however, his career was to be cut short by the most famous love affair of the Middle Ages. When Abélard was about 40, Fulbert, the canon of Notre Dame, entrusted him with the education of his beautiful niece Héloise, then nineteen or twenty. They fell deeply in love, and she bore him a son to whom they gave the peculiar name of Astralabe. Subsequently the couple were secretly married. But Uncle Fulbert was convinced that her lover intended to abandon her. Thirsting for revenge, he had Abélard seized by hired hooligans and castrated.

Despairing for a love now irretrievably lost, Abélard then became a monk at the royal abbey of Saint-Denis and browbeat Héloise into becoming a nun at Argenteuil. Thus began a series of correspondence between them of poignant and passionate love letters. Héloïse encouraged Abélard in his philosophical work and he dedicated his profession of faith to her. It’s though these remarkable letters that we know of their enduring love affair in the face of such adversity.

“You know, beloved, as the whole world knows, how much I have lost in you, how at one wretched stroke of fortune that supreme act of flagrant treachery robbed me of my very self in robbing me of you; and how my sorrow for my loss is nothing compared with what I feel for the manner in which I lost you.”

In a letter from Héloïse to Abelard

Later, when Argenteuil was dissolved, Héloise moved into a religious community called the Paraclete, which Abélard had founded. There she became the abbess.

Abélard continued to teach but eventually found himself in opposition to Rome and so retired to the famous Benedictine abbey at Cluny in Burgundy. On April 21st 1142 he died there at the age of 63. Perhaps in extremis he was not as certain of his religious principles as he had always been in the midst of life, for his final words were a plaintive ‘I don’t know! I don’t know!’

Abélard was buried in the Paraclete church, as he had requested. Héloise outlived him by 22 years and according to legend died with the words: “In death, at last, let me rest with Abélard” Initially she was buried beside her lover at the Paraclete. In the 19th century they were moved to the Pere-Lachaise cemetery in Paris.