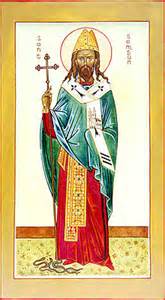 Christianity arrived in the Channel Islands during the 6th Century AD. It was brought largely by Welsh refugees escaping the tyranny of the Anglo Saxon invaders in their home areas. They initially fled to Brittany (known then as Armorica) and later on to the islands. Amongst the refugees were St. Magloire, and a relation St. Sampson.

It is St Sampson (originally spelt Samson) who is credited with bringing the Christian Gospel, to not only Guernsey, but the whole Channel Islands. In all likelihood though it is probable that the Channel Islands had already been visited by Christian missionaries prior to St Samsons but it seems that it is his proselytisation which really made the lasting difference.

St Samson wasn’t just a local phenomenon but would have been regarded as something of a celebrity, a “rock star of his time”. There were of course other missionaries to the islands – most notably st Magloire (see our article St Magloire – Patron Saint of Sark and St Helier. 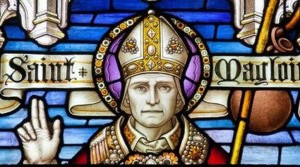 Even Herm – one of the smallest of the Channel Islands received Christian visitors. As well as establishing a colony of 62 monks on Sark St Magloire also established a foothold in Herm.

A story persists that St. Magloire’s followers built a chapel on the Pierre Percee Reef, which lies off of Rosiere Steps, between Herm and Jethou, at a time when the water levels were lower and the area drier, although evidence for this is sketchy and inconclusive. History books say that a great earthquake hit Guernsey in 709 AD causing a tidal flood affecting the west coast — whether this natural disaster had any effect upon the little church, if it did exist, we will never be know.

There is little doubt that one of the first buildings on the island was a church or dwelling for these visiting monks, and all the indications are that the first stones were laid on the site of the present day Priest’s Cottage – now used as holiday accommodation next door to the chapel built and dedicated to St. Tugual, another missionary monk of the same era.

St. Tugual, like St. Magloire, was born in Wales in about 490 AD. He too left his home area to seek refuge in Brittany. He came from a well respected family; his relatives included clan chieftains in south west England. St. Tugal was responsible for the creation and establishment of a religious group in Brittany. He later became the Bishop of Treguier.

The reason for the doubt is that it is not until 1251 that St. Tugual’s name is officially linked to Herm in any form of ecclesiastical documentation. An ancient register of churches of the time lists a chapel dedicated to St Tugual on Herm but this was recorded some 700 years after the saint had died. 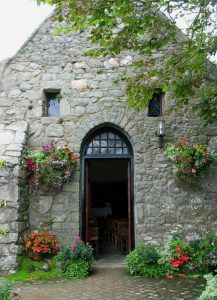 From the middle 900s the Channel Islands, including Herm, came under the control of the Duchy of Normandy, with its centralised seat of government in Rouen.

Herm was handed over by the Norman dukes to the control of various Norman monasteries which ‘ruled’ from different locations – namely Coutances, Mont St. Michel, and Cherbourg. (There was a short spell between 1199 and 1202 when the island’s ecclesiastical affairs were controlled by the Parish of Exeter).

From 1028-1025 -given to the Benedictine Abbey of Mont St Michel by Duke Robert of Normandy It was this group of monks that built the chapel and dedicated it to the memory of St. Tugual that we see today.

The monks established vineries on the island, farmed and gave religious instruction for many years.

The monks established vineries on the island, farmed and gave religious instruction for many years. They were also granted the right to claim items washed up on the island from shipwrecks which happened regularly in local waters during the Middle Ages.

Despite the split from Normandy in 1204 (see our article 1204 – The Birth of Guernsey’s Constitution) when the Channel Islands were politically separated from Normandy, the Church in the islands remained under the control of the Norman church for another 300 years until the reformation began.

And so it was that different groups of monks remained on Herm until the Reformation in the 1500s.

In 1536 Henry VIII confronted the Bishop of Coutances over the islands. He urged all ‘foreign friars’ in Guernsey (and surrounding islands) to swear allegiance or face the consequences. It was at this stage the last Norman monks departed and sailed for France.

In 1569 Queen Elizabeth I handed Herm over to the ecclesiastical control of Winchester.