Home » General Interest » The Origins of the Loch Ness Monster

The Origins of the Loch Ness Monster 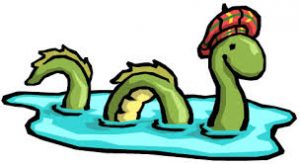 Loch Ness, the largest by volume, of all the many lochs in Scotland, is possibly the most famous body of water in the world. The reason, of course, is what is claimed to lie in its deepest, darkest depths – an astounding 755 feet (230 meters) at its deepest point.

The sense of mystery surrounding it is only enhanced by the murkiness of the water itself, due to the high levels of peat in the surrounding soil. The breadth, depth, and low visibility of this particular loch make a prime environment for someone’s imagination to run wild, particularly when other lake monsters were plentiful in Scottish legends.

The first recorded sighting of Nessie was in 565 A.D. by Irish missionary Saint Columba on one of his evagelising trips into the highlands. He came across a group of people burying a man who they said had been bitten by the monster in the River Ness. The Saint supposedly asked another man present to swim across the river. When the man jumped in, the monster rose from the depths and Saint Columba, invoking God’s power, banished it. However this story was first written down nearly a century after the supposed encounter. None the less, even today, it remains a popular piece of “evidence” used to demonstrate Nessie’s existence.

Like buses, we have to wait a long time for the next sighting, 1368 years to be precise, and again like the proverbial bus we then get 2 in quick succession. In 1933 George Spicer was out driving with his wife when they reported seeing a large creature walk in front of their car near the loch. The creature supposedly had a huge body, long neck, but they couldn’t see any limbs before it lunged back toward Loch Ness. A few weeks later, a motorcyclist claimed to have nearly run into a similar creature, describing it as a type of plesiosaur — a prehistoric marine creature with four large fins and a long neck – fitting the Spicers’ description. With the building of a road along the loch’s coast, soon many more reports of sightings of the monster started to flood in.

The first ‘picture’ of the monster was taken in November 1933 by Hugh Gray. He supposedly saw a large creature rise above the surface of the water and snapped several photographs before it disappeared, but only one photo turned out when he developed them. The picture shows a creature with a long neck and a thick body, with four lumps at its side which might have been flippers. However, it should be noted that, critics claim that the photo is of a dog swimming with a stick in its mouth … so not remotely frightening enough really.


Hoaxers Move in on the Act

Later that same year, a man named Marmaduke Wetherell, a well-known big game hunter, was hired by the Daily Mail to find evidence of the Loch Ness Monster. What he ‘discovered’ were large tracks on the edge of the lake from which he made molds. However when the Natural History Museum examined them they concluded they were likely made by a hippo’s foot. It should be noted that at this time hippo’s feet were popularly used as umbrella stands. Wetherell was promptly sacked for failing to find any substantial evidence. 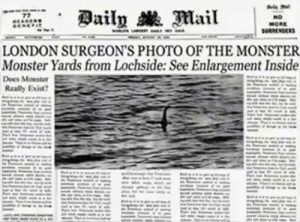 On April 21, 1934, possibly the most famous picture of the monster was published, again by the ever Nessie inquisitive Daily Mail. The picture was supposedly taken by a doctor named Robert Kenneth Wilson who, it was claimed, didn’t want his name associated with the photo – so it became simply known as the “Surgeon’s Photograph.”

The picture shows, from a distance, the long neck and head of the monster rising from rippling water. The picture is convincing to the untrained eye, though critics, certain the photo was a hoax, claimed it was everything from an elephant to a diving bird.

The sceptics were eventually proved right when in 1994, Christopher Spurling, the stepson of Marmaduke Wetherell (the very same man who found ‘hippo’s around the loch’), admitted to being involved in creating a model of Nessie’s neck and head and placing it on a toy submarine. The pair then took the model to Loch Ness and took photos of it in the water. Wilson was then given the photos as they felt that being a Doctor he would more likely be believed. Wetherell had of course come up with the hoax after being humiliated by his previous attempt at finding the monster.

Since then, countless videos, photos, and eyewitness accounts have emerged claiming to prove the existence of the Loch Ness Monster….

Inevitably with all the sightings and expeditions searching for the monster, Loch Ness has become a popular tourist destination. Of course, Nessie is discounted by scientists as a myth, but in the end maybe it just boils down to the fact that people need something to do with their free time and something to spend their holiday money on!