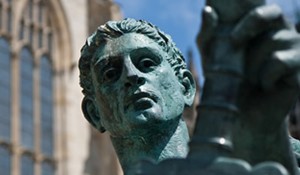 Christianity has shaped Western society and the way we perceive the world. It has been the major guiding force and philosophy in society and is still changing and influencing lives, governments and countries today. But how did a religion borne in an obscure backwater of the Roman Empire with its optimistic and tolerant message, suffering severe Roman persecution and oppression spread to become the most dominant religion in the world?

Part of the answer lies in the efforts of Jesus’ disciples, who along with the apostle Paul were on fire with the new Gospel to the point that all but a few of the 12 apostles died natural deaths. The majority were persecuted and executed for their faith. Clearly something phenomenal was going on with these simple men after Jesus’ death and resurrection. The message spread but the persecution from the Romans increased in intensity and ferocity. In 64AD Nero, in retribution for the great fire of Rome, ordered that Christians should be rounded up and killed. Some were torn apart by dogs others burnt alive as human torches. Over the next hundred years or so, Christians were sporadically persecuted until the mid-third century emperors initiated intensive persecutions.

The tipping point when Christianity was rocket-propelled from dynamic new religion to official state sponsored religion can be traced exactly to the day, it was 28th October 312 AD.


Discontent and a new Challenger for Emperor

At the end of October AD 312, the streets of Rome seethed with discontent. “The customary rains and showers of the winter season ceased to fall in their wonted abundance upon the earth and an unexpected famine made its appearance, and in addition to this a pestilence,” wrote the Christian chronicler Eusebius. “Some people, wasted away like ghosts and at the very point of death, stumbled and tottered here and there, and too weak to stand fell down in the middle of the streets.”

As was traditional, many people blamed the emperor, Maxentius – in this age of intense political unrest, he was merely one of a host of competing claimants across the empire. In the taverns, men discussed the latest news from northern Italy, where a former officer’s son called Constantine, whose troops had proclaimed him emperor in the remote city of York, was steadily moving south. That summer, Milan had welcomed him with open arms. Verona, Modena and Ravenna had followed suit. Now Constantine was approaching the Tiber, just a few miles north of Rome. At first, Maxentius cut the bridges and stockpiled grain for a siege. But at the city’s games on 27 October, public dissatisfaction boiled over, the crowds chanting Constantine’s name and mocking Maxentius as a coward. The very next morning, Maxentius led his army north.


A Big Day in History

The clash at the Milvian Bridge on 28 October has gone down as one of history’s decisive battles. Maxentius had partly destroyed the bridge in readiness for the siege, so his men crossed the Tiber on a hastily assembled pontoon bridge of wooden boats. The emperor drew up his forces, perhaps 75,000 strong, with the river at their backs, but it was Constantine who struck first, sending in his cavalry, who had been so effective for him in the past. As Maxentius’s line buckled, Constantine’s infantry joined the attack, pushing their adversaries back towards the river. Maxentius began to pull his men south, presumably to make a stand on the other side. Sagging under their weight, however, the improvised wooden bridge began to break up. “The boats with the men disappeared in the depths,” wrote Eusebius, “and first that most impious one himself [Maxentius], then the shield-bearers who were with him, sank like lead into the mighty waters, as the divine oracles had foretold.”


Constantine Attributes his Victory to the Christian God

Maxentius’s body was not found until the following day, when his severed head was exhibited throughout Rome as proof that he was dead. By this time, Constantine had already entered the city in triumph. Unusually, however, he did not visit the Temple of Jupiter to make the traditional sacrifices – a sign, perhaps, that here was a different kind of emperor and that something different was driving this man.

Unusually, however, he did not visit the Temple of Jupiter to make the traditional sacrifices – a sign that something different was driving this man

A year later, he issued the Edict of Milan, which, for the first time, made Christianity legal. And in May 337, just days before his death, Constantine was formally baptised, becoming the first Christian emperor in history. By now, legends were already circulating about Constantine’s victory at the Milvian Bridge, all those years ago. At the time of the battle, the emperor had not formally been a Christian, even though his mother, Helena, had undoubtedly taught him about her faith.

The Chi Rho symbol, which Constantine had painted on his soldiers shields after a vision from God. The symbol is formed by superimposing the first two letters of the word “Christ” in Greek, chi = ch and rho = r.

. After Constantine’s success at the Milvian bridge, the Chi Rho became the official imperial insignia.

For Christian chroniclers, however, it seemed obvious that his victory had been divinely inspired. The historian Lactantius claimed that on the night before the battle, the emperor had had a dream. It told him “to cause the heavenly sign to be delineated on the shields of his soldiers, and so to proceed to battle. He did as he had been commanded, and he marked on their shields the letter X, with a perpendicular line drawn through it and turned round thus at the top, being the cipher of CHRIST.”

Eusebius, however, told a different story, which he claimed to have heard from Constantine’s own lips. On the morning of the battle, he wrote, the future emperor had had a vision. Praying for divine aid, Constantine looked up, and there he saw “a cross of light” blazing in the heavens, and with it the Greek words ‘ἐν τούτῳ νίκα’ (‘By this sign, conquer’).

Can this really have happened? We will never know. Perhaps all that matters, though, is what the story signified. By the end of Constantine’s reign, Christianity was well on the way to becoming the most popular creed in the Roman world. If that battle on 28 October had gone the other way, how different things might have been.