Unlocking the Secret of Egyptian Heiroglyphs – The Rosetta Stone

Published on Jul 2, 2013 in History, Literature

The Rosetta stone is one of the most valuable artifacts ever to have been found by archaeologists. It literally unlocked the secrets of the Ancient Egyptians. 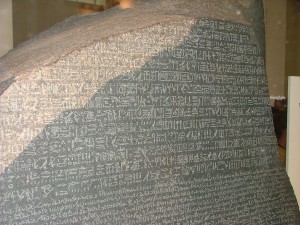 Until 1799, when the stone was discovered by Napoleon’s invading French Army, archaeologists only had a sketchy idea of how to read the Hieroglyphs of the Ancient Egyptians. Their rich language, culture and beliefs were a complete mystery and one could only marvel at their accomplishments in art & architecture in a kind of mute awe. None of the richness of this ancient civilisation could be deciphered or understood. It was a completely unknown script.

It was soon after the end of the fourth century AD that hieroglyphs fell completely out of use, along with the knowledge of how to read and write them. It wasn’t until 1400 years later that scholars were finally able to finally decipher them.

What was needed was a point of reference, a set of hieroglyphs alongside a translation in another of the other known ancient languages. This is exactly what the Rosetta stone supplied. 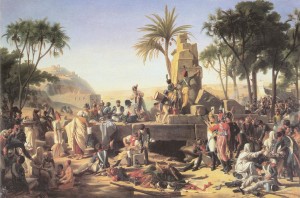 In 1798 Napoleon mounted a campaign in Egypt in an attempt to block British trade routes to the east, specifically India. The expeditionary army was accompanied by the Commission des Sciences et des Arts, a corps of 167 technical experts (savants).

Soldiers in Napoleon’s army discovered the Rosetta Stone in 1799 while digging the foundations of an addition to a fort near the town of el-Rashid (Rosetta). It was immediately spotted for what it was, a major archaeological find, and handed over to the scientists accompanying the army.

In 1800, three of the Commission’s technical experts devised ways to make copies of the texts on the stone. The prints that resulted were taken to Paris by General Charles Dugua. Scholars in Europe were now able to see the inscriptions and attempt to read them.

On Napoleon’s defeat, the stone became the property of the British under the terms of the Treaty of Alexandria (1801) along with other antiquities that the French had found.

The Rosetta Stone has been exhibited in the British Museum since 1802, with only one break. Towards the end of the First World War, in 1917, when the Museum was concerned about heavy bombing in London, they moved it to safety along with other, portable, ‘important’ objects. The Rosetta Stone spent the next two years in a station on the Postal Tube Railway 50 feet below the ground at Holborn.

The Rosetta Stone is a priestly decree affirming the cult of 13-year-old Ptolemy V. It tells of an agreement between Egyptian priests and the pharaoh on March 27, 196 B.C. It names honours bestowed on Macedonian Pharaoh Ptolemy V Epiphanes. After praising the pharaoh for his generosity, it describes the siege of Lycopolis and the king’s good deeds for the temple. The text then continues on with its main purpose: establishing a cult for the king. 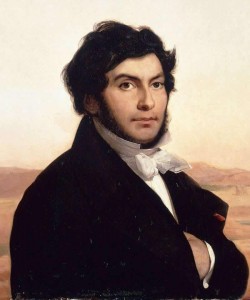 The Rosetta Stone is inscribed in 3 languages:

It was the Greek text on the Rosetta Stone that provided the starting point. Ancient Greek was widely known to scholars.

The copies of the script on the stone was worked on by Jean-Francois Champollion (1790-1832) , a brilliant linguist and expert in ancient languages. It was Champollion who finally found the key to translating the Rosetta Stone in 1822, and published in ‘Lettre à M. Dacier.’ 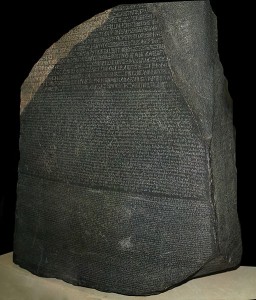 In the reign of the young one—who has received the royalty from his father—lord of crowns, glorious, who has established Egypt, and is pious towards the gods, superior to his foes, who has restored the civilized life of men, lord of the Thirty Years’ Feasts, even as Hephaistos the Great; a king, like the Sun, the great king of the upper and lower regions; offspring of the Gods Philopatores, one whom Hephaistos has approved, to whom the Sun has given the victory, the living image of Zeus, son of the Sun, Ptolemy living-for‑ever beloved of Ptah; in the ninth year, when Aëtus, son of Aëtus, was priest of Alexander …; The chief priests and prophets and those that enter the inner shrine for the robing of the gods, and the feather-bearers and the sacred scribes, and all the other priests … being assembled in the temple in Memphis on this day, declared: Since king Ptolemy, the everliving, the beloved of Ptah, the God Epiphanes Eucharistos, the son of king Ptolemy and queen Arsinoe, Gods Philopatores, has much benefited both the temples and those that dwell in them, as well as all those that are his subjects, being a god sprung from a god and goddess (like Horus, the son of Isis and Osiris, who avenged his father Osiris), and being benevolently disposed towards the gods, has dedicated to the temples revenues in money and corn, and has undertaken much outlay to bring Egypt into prosperity, and to establish the temples, and has been generous with all his own means, and of the revenues and taxes which he receives from Egypt some has wholly remitted and others has lightened, in order that the people and all the rest might be in prosperity during his reign …; It seemed good to the priests of all the temples in the land to increase greatly the existing honours of king Ptolemy, the everliving, the beloved of Ptah … And a feast shall be kept for king Ptolemy, the everliving, the beloved of Ptah, the God Epiphanes Eucharistos, yearly in all the temples of the land from the first of Thoth for five days; in which they shall wear garlands, and perform sacrifices, and the other usual honours; and the priests shall be called priests of the God Epiphanes Eucharistos in addition to the names of the other gods whom they serve; and his priesthood shall be entered upon all formal documents and private individuals shall also be allowed to keep the feast and set up the aforementioned shrine, and have it in their houses, performing the customary honours at the feasts, both monthly and yearly, in order that it may be known to all that the men of Egypt magnify and honour the God Epiphanes Eucharistos the king, according to the law.