Want to Study Volcanoes – Then look at art work 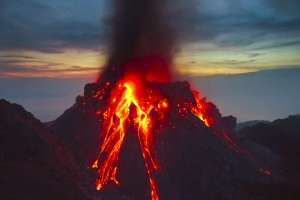 Vulcanologists have always found it difficult to find sources of evidence to examine to trace the history of volcanic eruptions on Earth and their effect on the climate.

However scientists have recently hit upon a rather unusual new source – by studying paintings.

The effects of historical eruptions on the composition of the atmosphere are difficult to estimate owing to a lack of measurements or samples surviving from those times. But now a scientist, Christos Zerefos, from the Academy of Athens and his colleagues’ have come up with a proxy measure that could be used to shed light on the problem – old masterpieces.

They analysed the sunsets immortalised in hundreds of paintings from the Last 500 years, including works by Turner, Klimt and Degas. Using digital images of the paintings, the team calculated the red/green colour ratios and found that artists used much more red after major volcanic eruptions such as the explosions at Krakatoa in 1883 and 1680. They then used the red/green ratios from the paintings to calculate how much light was being interrupted by voicanic ash particles in the air. Their results tally well with what we know of the composition of the atmosphere at these times, suggesting that this could be an effective way to historically reconstruct the stratosphere.