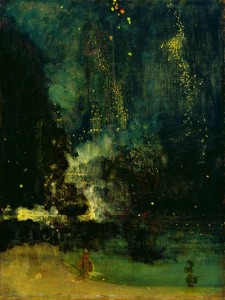 Whistler's "Nocturne in black and gold"

I have seen, and heard, much of Cockney impudence before now; but never expected to hear a coxcomb ask 200 guineas for flinging a pot of paint in the public’s face.

So, infamously, the Victorian critic John Ruskin expressed his condemnation of James McNeill Whistler’s phantasmagorical “Nocturne in Black and Gold” of 1875. The libel action that ensued led to an apparently nominal victory for the artist – he was awarded damages of just one farthing – but in reality it gave him much more: a platform from which to plead the rights of artists to express themselves, unfettered by critical constraints, and to raise the war cry of aestheticism – ‘art for art’s sake’.

Ruskin’s utter incomprehension of Whistlers work is nothing unusual. Each successive age sees a restaging of the battle between artist and critic, in which the latter – often mirroring conservative public taste – cries out in horror and disdain at the supposed excesses of a new and assertive generation of artists. In our own time we witness the constant wringing of critical hands at the latest artistic atrocity: a pickled shark, a urine-soaked canvas, an unmade bed. The conflict is timeless and beyond resolution because it is motivated by a fundamental disagreement on the most basic of questions: “What is art?”

In philosophical jargon, Whistler and Ruskin disagree on the nature of aesthetic value, this is the area of philosophy known as aesthetics.


History of Art (in 3 paragraphs)

The view among the ancient Greek philosophers such as Plato and Aristotle was that art is a representation or mirror of nature.

The idea of art as representation and its close association with beauty held sway well into the modern period. It wasn’t until the late 19th century that form was elevated over content and abstractionism came into play and became a more dominant role in Western art.

In another influential departure from representation, expressionism renounced anything resembling close observation of the external world in favour of exaggeration and distortion, using bold unnatural colours to express the inner feelings of the artist. Instinctive and consciously non-naturalistic, such expressions of the artist’s subjective emotion and experience were regarded as the hallmark of true works of art.


So Why Are We Trying To Define Art ?
The tacit assumption is that true knowledge of something depends on being able to define it.

A perennial theme of Western philosophy since Plato has been the pursuit of definitions. The Socratic dialogues typically pose a question – what is justice, what is knowledge, what is beauty. The tacit assumption is that true knowledge of something depends on being able to define it.

But what if you can’t define it ? This would present us with a paradox, for those who cannot provide a definition of a given concept are generally able to recognize what it isn’t, which surely requires that they must know, at some level, what it is.

As an example of the struggle to define abstract concepts like Art, take the word ‘game’. We all have a clear idea what games are: we can give examples, make comparisons between different games, arbitrate on borderline cases, and so on. But troubles arise when we attempt to dig deeper and look for some essential meaning or definition that encompasses every instance. For there is no such common denominator: there are lots of things that games have in common, but there is no single feature that they all share. In short, there is no hidden depth or essential meaning: our understanding of the word is no more or less than our capacity to use it appropriately in a wide range of contexts.


So Do We Really Need To Define Art ?
the attempt to define art is misconceived and doomed to failure

So coming back to the concept of art. We seem to know what it is, yet struggle to define the necessary and sufficient conditions for something to count as a work of art. In our perplexity, it is perhaps natural to ask whether the task of definition is not itself misconceived: a wild-goose chase whose aim is to pin down something that stoutly refuses to cooperate.

If we suppose that ‘art’, like ‘game’, is a family-resemblance word (ie there is a group or family of objects that all have characteristics that makes them a family), then a lot of our difficulties might disappear. Works of art have many things in common with other works of art: they may express an artist’s inner emotions; they may distil the essence of nature; they may move, frighten or shock us. But if we cast around for some feature that they all possess, we will search in vain; any attempt to define art – to pin down a term that is essentially fluid and dynamic in its use – is misconceived and doomed to failure.