What’s in a Name – L’Ancresse Bay

So, no surprise then that this flat sandy bay in the north of the island should be named as an “anchorage”.

What is surprising though is one of the stories associated with how it was given this name. That is the story of when Robert “the devil” Duke of Normandy met the Abbot of St Michel du Valle.

The Duke of Normandy’s Fleet

In 1032 Duke Robert of Normandy left Fecamp in Normandy with a large fleet and headed for England. Robert’s intention was to confront the Danish King Canute and restore his two cousins, the princes Alfred and Edward, as rightful heirs to the throne of England.

Robert’s fleet, carrying a large army, sailed from Fecamp in Normandy but after only a day’s journey ran into a huge storm. 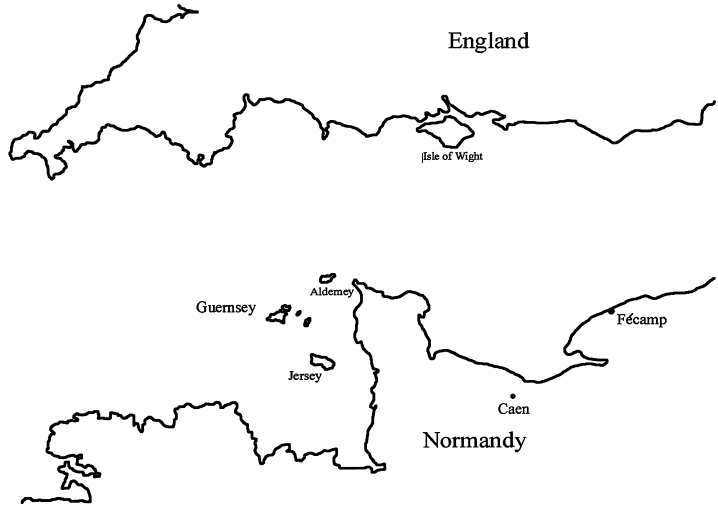 A Family Squabble - Battle for the English Throne

Alfred and Edward were the sons of King Ethelred II, also known by the unfortunate moniker of “Ethelred the unready“, and half brothers to Ethelred’s successor Edmond.

Canute, a Dane, had become king of all England in 1017 after invading and murdering King Edmond in 1016.

Alfred and Edward had sought shelter in Normandy. Edward was to go on to become THE Edward the Confessor and ultimately helped to perpetuate the Norman~Anglo-Saxon entanglement by failing to provide an heir and opening the door to William “the Bastard” – later William the Conqueror’s conquest of England.

The fleet was dispersed with many of his ships being completely wrecked. The vessel Robert was in, and about twenty others, were forced down the channel as far as Guernsey where the battered remnants of the fleet appeared off the island’s north coast.

They would have been dashed to pieces on the rocky coast of the island had it not been for local fishermen. Seeing them in distress, they ventured out, piloting them into “the shelter of the large bay on the northern tip of the Island” where they anchored. Tradition has it that this has ever since been called La Bay de L’Ancresse, or Anchorage Bay.

The Duke & The Abbot

The Duke was brought ashore and lodged in the Abbey of St Michel, the Abbot receiving him “with all the respect and hospitality a subject could to a sovereign.“

Somewhere around A.D. 968, monks from the Benedictine monastery of Mont St Michel came to Guernsey to establish a community in the north of the island. This area of Guernsey formed a separate island at high tide, and continued to do so until 1806.

The storm raged for a further 2 weeks which gave time for preservation of the remains of Robert’s shattered fleet.

The Duke was so well received by the Benedictines that he is said to have confirmed them in the possession of the lands they had cultivated. He also gave them the island of Herm. To his Admiral, Restald, he gave the island of Jethou – presumably in gratitude for helping save some of the fleet.

In gratitude to the islanders for saving his life Robert decided to leave two engineers behind to complete the building of the Vale castle and construct and repair other fortifications, namely the Chateau du Marais and Jerbourg castle, in order to protect the inhabitants from the depredations of pirates who over the years had plagued the island.

If Robert’s engineers built the bridge at St. Sampson then the date of its construction would be about 1032 or 1033; a crude bridge might have existed prior to that time but the origin of St. Sampson’s bridge is open to conjecture.

In conclusion, whether the Abbot actually met the Duke of Normandy when he landed at L’Ancresse in about 1032 or not is open to speculation. But it does make a great story!

And Finally … Some Random Factlets :