Home » General Interest » When will fossil fuels run out?

When will fossil fuels run out? 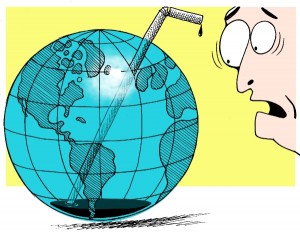 You’d think that the question “When will fossil fuels run out?” would be relatively easy to answer, or at least be able to give a good estimate for. However as we’ll see it isn’t. Doom laden predictions for the exhaustion of this most valuable of resources were even being made only a few years after the invention of the petrol engine. However there are some people claim that it, or at least ‘natural resources’, will never run out.

In his book, “The Ultimate Resource”, Julian Simon (a professor of business administration at the University of Maryland) asserted that he believed that the world will never run out of natural resources. According to Professor Simon, human ingenuity has always ensured that long before any resource literally runs out, some alternative is found. On the face of it this seems like a preposterous statement so we’ll need to dig deeper into this assertion first before we can hope to answer our original question.


A Bet is made

In 1980 Professor Simon made a wager with Paul Ehrlich, an American Biologist famous for his doom-laden predictions of over-population and exhaustion of the world’s resources.

nothing ever really runs out

He bet that the price of any 5 industrial metals chosen by Ehrlich would actually be lower in real terms ten years later – in line with his contrarian view that nothing ever really runs out. Ehrlich accepted what seemed an easy way to relieve Professor “Smarty Pants” Simon of his money. When 1990 arrived and the prices of the 5 metals were checked it was found that they had indeed fallen by an average of almost 40% in real terms compared to 1980.

Simon’s successful prediction should make us therefore sceptical about claims that everything is running out. This is borne out when we look at the history of predictions for fossil fuels running out.

Fossil fuels have been predicted to run out many times over the last century, while doing no such thing.

In 1920 total reserves of oil were estimated at 60 billion barrels; barely 2 years’ worth at today’s rate of consumption

As early as 1874, there were warnings that US oil reserves would dry up within 4 years. In 1920, the US Geological Survey estimated the world’s total reserves of oil at around 60 billion barrels; barely 2 years’ worth at today’s rate of consumption. The figure zoomed upwards to 600 billion barrels in 1950 and today it is five times higher still.

During the 1940s, 35 per cent of drilled wells were dry. By the 1990s, just 23 per cent were. Long term, the price graph has been pretty steady – except for occasional blips like 1973 and 2005. It is a similar story with coal and gas, the price of which is declining in real terms. So how is this possible?

The explanation lies in the ever more sophisticated methods of finding and extracting the stuff, just as the late Professor Simon claimed. Is this an excuse for profligacy? Not at all; quite apart from the environmental arguments against waste, there are some geopolitical ones. For example, if the US could give up its gas-guzzling ways and become as energy efficient as western Europe, it could free itself of reliance on oil from the Gulf states.


So what’s the latest prediction ?

Given what we’ve discussed above, making any prediction is pretty impossible. But none-the-less I’m guessing, like me, you at least want to know what the latest prediction could be.

In 2009 proved reserves were estimated as follows :


But if I were you I’d take the above figures with a large pinch of salt, or even go so far as to NOT believe them!.