Home » Trivia » Where Do Houseflies Go During the Winter?

Where Do Houseflies Go During the Winter? 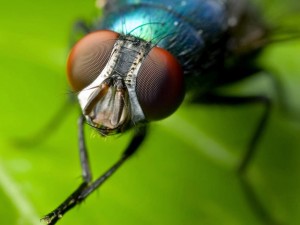 Where Do Houseflies Go During the Winter? – To fly heaven (usually).


Some flies survive winter, but only under extremely favorable conditions, when they can take shelter in barns or inside human residences where they can find enough organic matter and warmth to eat and breed.

the normal life-span of a housefly north of the equator is approximately 7 to 21 days.

Even under the best of circumstances, the normal life-span of a housefly north of the equator is approximately 7 to 21 days. The most important variable in the longevity of these insects is the ambient temperature—they die off in droves when it falls below freezing or becomes excessively hot.

Although they actually live longest in cool temperatures, because they are less active, flies breed most prolifically when temperatures are warm, food is abundant, and humidity is moderate. Winter tends to deprive them of all of these favorable conditions, so that they not  only die off themselves, but do so without having been able to breed successfully. 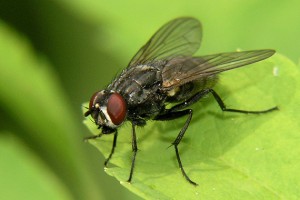 So how can they regenerate the species ? Most people believe that flies hibernate or become dormant, like some other insects, but this theory has proved to be untrue. The few flies that we find in the spring are mainly the descendants of the adult flies that managed to find good hiding places during the previous winter. These spring flies breed their little wings off, just in time to harrass you on your picnics when the weather gets good.

Some of the flies that survive winter are not adults, but rather flies in their earlier developmental  stages. Fly eggs are usually deposited in the ground, in crevices, in wood, or in a particular favorite, cow manure. These eggs hatch, literally, in a few hours, and turn into larvae, a phase that can last anywhere from one to four days. Larvae feed on decaying plant or animal matter (such as other insect larvae). As the fly larva grows, it undergoes pupation, a phase that lasts about five days, in  which  the fly rests as its larval features are transformed into adult ones.

Many entomologists used to answer this question by speculating that most flies that survive the winter do so in the form of larvae or pupae, but scientists now believe that adult flies have a much better chance of surviving the winter than their younger brethren, who have a hard time coping with cold weather. Still, some larvae and pupae do stay alive during the very end of winter and develop into adults in the spring.

The fecundity of the Musca domestica is truly awesome. One scientist estimated that a single mating pair of houseflies could generate as many as 325,923,200,000,000 offspring in one summer.

Any notion  that flies migrate south during the winter is easily dispelled. The average flight range of a housefly is a measly one-quarter of a mile. Scientists have tracked the flight of flies: they rarely go beyond a ten-mile radius of their birthplace during their entire lifetime.