Home » Science » Why did the Dinosaurs die out?

Why did the Dinosaurs die out? 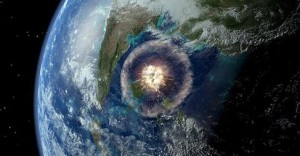 Asking ‘Why did the dinosaurs die out?’, most people would say that it was a vast meteorite that hit the earth wiping out much of the animal and plant life. Whilst undoubtedly this was a major contributing factor it is only part of the reason.


A Series of Natural Catastrophes

The dinosaurs probably died out because of a combination of natural disasters: global warming over millions of years, followed by a series of colossal volcanic eruptions in India that released vast quantities of poisonous gas, at almost the same time as a massive asteroid smashed into the Earth.

they died out because of a combination of natural disasters…at almost the same time as a massive asteroid smashed into the Earth.

The dinosaurs ruled the planet for over 160 million years, but 65 million years ago something terrible happened that wiped out every species of dinosaur (except for the ancestors of birds).

So what was this terrible event? Most people nowadays have heard that an asteroid or meteorite killed the dinosaurs (a meteorite is an asteroid that has fallen to Earth), and there is a lot of evidence that a 10 km (6.21 miles) wide asteroid slammed into Mexico about 65 million years ago. The crater it left is hidden under rocks and water, beneath an area called Chicxulub, and the event is known as the Chicxulub impact. 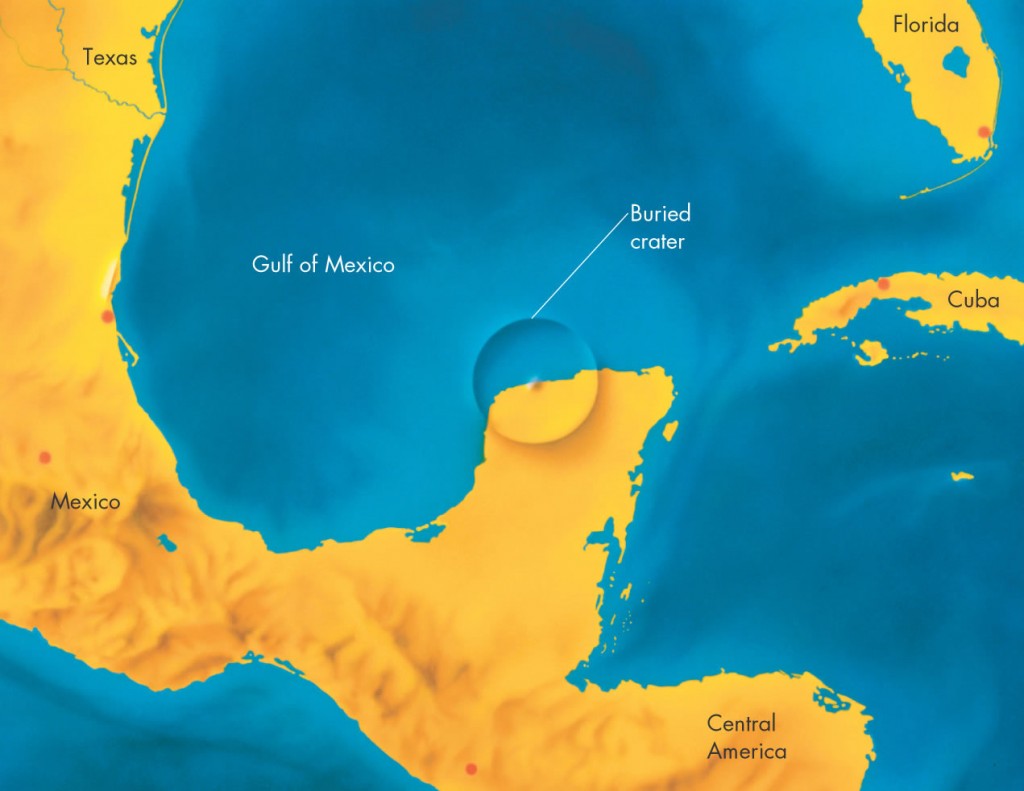 The location of the Chicxulub impact

The Chicxulub impact blasted a crater 180 km (111.85 miles) wide, setting off earthquakes around the planet. The explosion took out most of North America almost instantly with a flash of intense heat and a destructive Shockwave, battering the rest of the planet with super-powered hurricanes – or hypercanes – five times more powerful than the biggest hurricanes we get today.

A huge wall of water known as a tsunami raced outwards from the impact site, reaching up to 300m (about 328 yd) high and sweeping 300 km (about 186 miles) inland. But all this was only the beginning.

Vast amounts of melted rock were thrown into the sky and rained down all over the planet, setting fire to everything. Up to a quarter of all life on land was burned to ash. The dust and smoke shut out all sunlight, probably for several years, so that the Earth froze in the darkness as temperatures fell by up to 15C (59F). Plants could not photosynthesize, and poisonous gas made the oceans toxic. The ozone layer was damaged, so that when the smoke finally cleared the Earth’s surface was bathed in deadly ultraviolet light.

As if this were not bad enough, life on Earth was probably already suffering as the result of a series of volcanic eruptions in India known as the Deccan Traps. These were not like ordinary volcanic eruptions; they were much, much worse. About 512,000km3 (about 122,835 miles3) of molten rock poured out of a titanic gash in the Earth’s surface. When it cooled it left a layer of solid rock over 2 km (1.24 miles) thick in places, covering an area of 500,000 km2 (about 193,051 miles2).

The heat, ash and poisonous gas released by the Deccan Traps eruptions helped push the dinosaurs close to extinction. The final nail in the coffin was the Chicxulub impact which is what probably finished them off.


A Cheery Thought to Sum Up

Humanity could easily go the way of the dinosaurs. There are several places on Earth, such as Yellowstone National Park in the US, and the area around Naples in Italy, where eruptions on the scale of the Deccan Traps could happen at any moment. Also, there are millions of asteroids that cross the Earth’s orbit, and some of them could be 10 km (6.21 miles) wide or bigger. Over a long time scale, your chances of dying because of an asteroid impact are roughly equivalent to your chances of dying in an air crash.