Why Do Clocks Run Clockwise ? 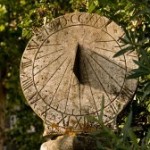 In horseracing and most forms of skating, we are accustomed to seeing movement in a counter-clockwise direction. Is there any particular reason why clocks run ‘clockwise’? The explanation, it turns out, is quite simple for this Imponderable.

Before the advent of clocks, we used sundials. In the Northern Hemisphere, the shadows rotated in the direction we now call ‘clockwise: The clock hands were built to mimic the natural movements of the sun. If clocks had been invented in the Southern Hemisphere, one may speculate, Clockwise would be the opposite direction.

Oldest working clock in the world. Built in 1386

Around 1275, an Italian monk designed the first mechanical clock. The clock was driven by the slow pull of a falling weight, basically like a very big hour hand. The world’s oldest working clock (pictured opposite) was built in 1386 and is still ticking away at Salisbury Cathedral in the UK. Like all clocks of that time it has no face but strikes the hour on a bell. Today, the International Atomic Time, kept by 300 atomic clocks around the world, keeps earth’s time to within microseconds of accuracy of solar time. You can discover how an atomic clock works in another article here >>.