Home » Trivia » Why Do Teapots Dribble ?

Why Do Teapots Dribble ? 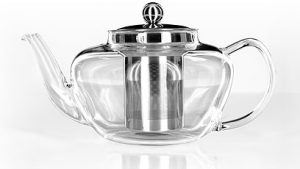 For the British, the taking of tea is part of our cultural heritage so you can understand why the dribbling teapot would be of particular concern.That said, the definitive paper on the subject comes from a group of Frenchmen based at the University of Lyon. They discovered that certain features of the ‘dribblesome teapot’ could not be predicted by the science of hydrodynamics (although it should be pointed out that this was because no one had ever bothered to look before).

Before the French’s teapot experimentation project it was held that when large amounts of liquid (such as a mug of tea) flow through a tube (such as a teapot spout), the nature of the tube’s surface should not matter. But as any serious tea buff will tell you – we know it does because the traditional cure for a dribbly teapot is to smear a little butter on the lip of the spout – but then you get greasy tea !


So, clearly, the surface of the lip of the teapot is crucial to its dribble factor. The French team discovered that there are 3 things that come into play…


So all 3 effects combine to create a dribble as follows : 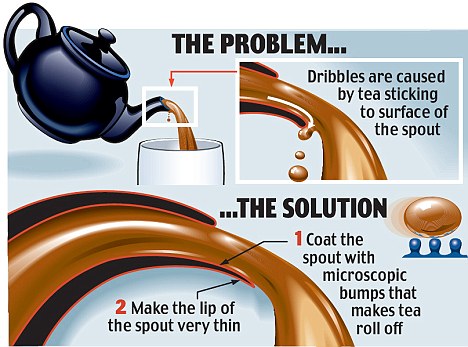 As a stream of tea shoots off the edge of the spout a little bit of liquid sticks to the very edge of the lip. If the lip is not very water-repelling, the tea sticks better to the lip and pulls the stream of liquid back and down towards the underside of the lip. The amount by which the stream is pulled back also depends on the contact angle, and this is determined by the curvature and thickness of the lip. Together, these effects can pull the stream of tea far enough back that it clings to the underside of the spout and dribbles. As the flow of liquid speeds up, the effect becomes too small to deflect the faster moving tea and the dribble stops or, at least, diminishes.


However, understanding the hydrodynamic causes behind teapot dribble is not much comfort if your own teapot is dribbly. You could try pouring the tea faster, but from my own experience this still ends up with tea on the table as you overshoot the cup. Another trick could be to change the thickness of the lip of your teapot by pushing a short length of clear plastic piping over the spout and cutting it at an angle – the idea here is to make a new, thin, sharpedged and more water-repellent spout. Except, of course, that it looks awful and ruins your fancy teapot’s designer lines!

Modern science has a variety of superhydrophobic materials that are unfortunately expensive and tricky to get hold of, except for one: soot.

If neither solution appeals, all you can do is to apply a layer of super-hydrophobic (very water-repellent) material to the lip. The classic smear of butter does just this, but as we’ve already mentioned this just leaves a thin oil slick on the tea.

Modern science has a variety of superhydrophobic materials that are unfortunately expensive and tricky to get hold of, except for one: soot. A layer of soot from, say, a candle, creates a surface that will not wet – any water just beads off. Hold your teapot spout over a candle flame until it is blackened, wipe off any soot from the top of the spout but make sure to leave soot on the inside of the bottom lip, and your teapot will be dribble-free. True, you will now get flecks of soot in your tea, but that has got to be better than butter!