Home » General Interest » Why do the dimples on golf balls make them fly further?

Why do the dimples on golf balls make them fly further? 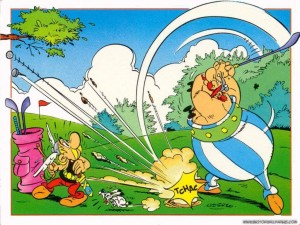 Those cute little dimples on golf balls aren’t just for decoration. They have a very real practical use.

Golf balls acquired their distinctive dimpled pattern around a century ago, when manufacturers took advantage of the discovery that a ball with a rough surface travels further and higher than one that is perfectly smooth. On the face of it, it has to be said, that this is decidedly counter-intuitive: surely something with a rough surface will encounter more friction as it flies through the air?

The explanation lies in the effect of the dimples on the flow of air around the ball. In flight, a wake of turbulent air forms behind the ball, extracting energy from it, meaning it doesn’t travel as far as it might. The dimples give the slightly “sticky” air flowing around the ball something to latch on to and as a result, it wraps itself more smoothly around the surface, reducing the size of the turbulent wake. That, in turn, reduces the energy loss due to drag and allows the ball to travel further for a given whack.

Golf ball manufacturers have spent fortunes trying to find very best combination of size, shape and arrangement of dimples. For many years, relatively simple patterns of around 300 dimples were thought to do the trick. In 1995, the US manufacturer Wilson introduced its 500 Series ball, designed by a NASA aerodynamicist, which has 500 dimples of varying sizes arranged in a pattern of sixty spherical triangles. The large dimples are said to reduce the turbulence effect, boosting lift and maintaining any spin put on the ball, while the small dimples prevent the lift getting out of control. Whatever; they still won’t turn a twenty handicap player into Tiger Woods !