Home » General Interest » Why do we shake hands as a greeting?

Why do we shake hands as a greeting? 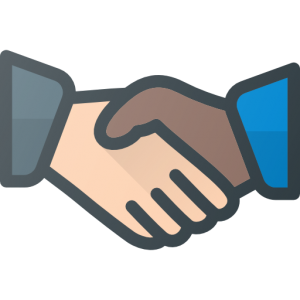 The reason we shake hands has nothing to do with warmth or kindness and everything to do with mistrust. Just as we clink glasses so that if our companion has poisoned our drink he’ll get to drink some of his own poison (by virtue of contents slopping between glasses), we shake hands to check for concealed weapons.

It all goes back to the Middle Ages, when two men would extend their right hands – their weapon hands – to show that they weren’t carrying daggers.

Shaking hands (as opposed to hand-shaking, which is something quite different) also has another function as the ratification of a deal or a pledge: “Let’s shake hands on it.” Here, people are not checking for weapons but are entering into a symbolic union, however brief. This goes back to ancient times when shaking hands was a sort of primitive magic that signified two people yielding to one another. You won’t be surprised to know, therefore, that the shaking and clasping of hands played a very big part in ancient wedding ceremonies.

Women, who rarely carried weapons, didn’t need to go through this routine, which explains why they didn’t develop the custom of shaking hands until (relatively) recently.


So, there you have it – it’s all based on Medieval mistrust!