Home » General Interest » Why doesn’t the Earth move when we move our eyes ?

Why doesn’t the Earth move when we move our eyes ? 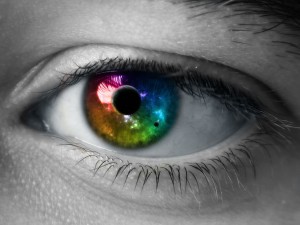 This is another of those questions to which the first response is often ‘Why should it?’ But if you think about it a little more, when something moves in the external world, its image moves across the retina, the ‘screen’ at the back of the eye, and that’s presumably one way we know that it is moving. If something is stationary in the external world, however, and we move our eyes past it, its image will move across the retina in the same way. Similarly, if the whole external world were to move, in an earthquake for example, its visual impact on the retina would be no different from when the eye moves quickly from side to side. How do we tell the difference?

The explanation is to be found in a feedback system in the body. You can imagine it as a communication network that sends a message to the brain every time the head or the eyes move, saying, ‘Don’t worry – this violent motion is not real. It’s not the world that’s moving, it’s just me.’

It’s like tests of the emergency alarm system sometimes carried out on US radio stations that are always accompanied by messages which say, ‘Do not be alarmed – this is not the real thing.’ The day you hear the alarm without the message is the time to start worrying.

But what element of the physiology of the head and eyes is it which sends the message to reassure us that it is we who are moving rather than the world? It could, for example, be that there are movement detectors of some sort in the head or eyes, which are activated when the eye moves. Or perhaps there are position indicators, like the sensors that tell someone – approximately – where his hand is when he tries to touch his nose with his eyes shut.

In fact, these two can be ruled out by a simple experiment. If you close one eye and jiggle the other up and down with your finger, the world will appear to be moving in synch with your finger movements, which, in turn, are moving your eye. If the message that told you the world wasn’t really moving came from movement detectors in your eye, your brain would think the world was motionless, because your eye would still be moving in exactly the same way as if you had willed your muscles to move your eyes. Similarly, since your eye changes position in response to your finger in the same way that it changes position when you move it voluntarily, you would again see the world as still and yourself as moving.

It’s the fact that you are choosing to move your head or eyes which triggers the signal to the brain that says, ‘Don’t worry, the world is not moving.’

The only difference between the movement of your eyes in those two situations is that when you move your eye with your finger, you are doing it passively; when you move it in the same way using your eye muscles, you are doing it actively. It’s the fact that you are choosing to move your head or eyes which triggers the signal to the brain that says, ‘Don’t worry, the world is not moving.’ Part of the signal your brain sends to your eye muscles is diverted back to the brain to cancel out the impression of movement. That ‘cancel’ message is not sent when you jiggle your eye with a finger, because the instruction from the brain to the eye is absent.