Home » Food & Drink » Why Guiness is Less Irish than you Think

Why Guiness is Less Irish than you Think 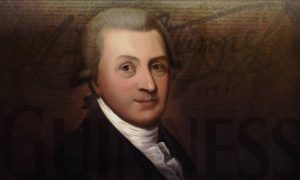 St Patrick’s Day, on March 17th, is an annual celebration of all things Irish – and of one thing in particular. Around Ireland, and all over the world, people celebrate with a pint or two (or more !) of Guinness, Ireland’s unofficial national intoxicant.


Publicans love St Patrick’s Day, so much so that it can sometimes feel like less a celebration of Irish culture than a marketing event for Guinness. Now exported to more than 120 countries, the black stuff has become a powerful symbol of Ireland. But how Irish is it really?

Arthur Guinness, who founded a brewery in Dublin in 1759, might have been surprised that his drink would one day become such a potent national symbol…

It’s All A Marketing Trick …

Guinness is not the only company to play up or hide its national origins in an effort to boost sales. Jacob’s biscuits have been marketed by some shops as being British, in spite of the company’s origins as an Irish company from Waterford. And Lipton now markets its black tea on the strength of the company’s British origins, in over 100 countries- except Britain, where it is not widely sold. In a world where multinational companies control a large chunk of the global food supply chain, national identity – at least in branding – matters as much as ever.