Home » General Interest » Why is the Sky Blue?

Why is the Sky Blue?

Viewed from space the sun is supposedly a ‘peach pinkish’ colour, while the sunlight that hits the Earth is white. So why is the sky seen as being blue?

In a Nutshell :  The sky is blue because air scatters blue light but lets other colours pass straight through.

In scientific terms, colour corresponds to a particular wavelength of light and so white is a mixture of all wavelengths of the different colours. The colours that we see are the result of what happens to sunlight as it passes through the atmosphere, all 5,200 trillion tonnes of it – that’s about 25 million tonnes of air for every square mile of the Earth’s surface.

If you were to look directly at the sun (which you should never do ofcourse) you would see yellowish white light. This is what is left of the sunlight that is coming directly to your eyes after the wavelengths of blue have been scattered by hitting air molecules. The red and yellow light is hardly scattered at all, and so comes directly down to Earth in a straight line. The blue light, on the other hand, bounces about all over the sky and some of it eventually reaches our eye. So if you look anywhere other than directly at the sun, you will see blue light.


As the sunlight – with its mixture of colours/wavelengths -passes through the atmosphere, it hits air molecules and some of it gets scattered. This effect is called Rayleigh scattering, after the British physicist John William Strutt, Lord Rayleigh (1842-1919), who worked out why it happens. The amount of scattering that happens depends on the wavelength of the light and the size of the particles that are doing the scattering. Very tiny particles, like the oxygen and nitrogen molecules that make up 99 per cent of the atmosphere, scatter short wavelengths of light (blue colours) but not long wavelengths (red). The same effect can be seen in smoke made up of very tiny particles, and this is why tobacco smoke appears blue. This colour is named after a different physicist, John Tyndall (1820-93), and is known as Tyndall blue. In fact, it was Tyndall who first explained why the sky is blue, even though Rayleigh gets all the glory. 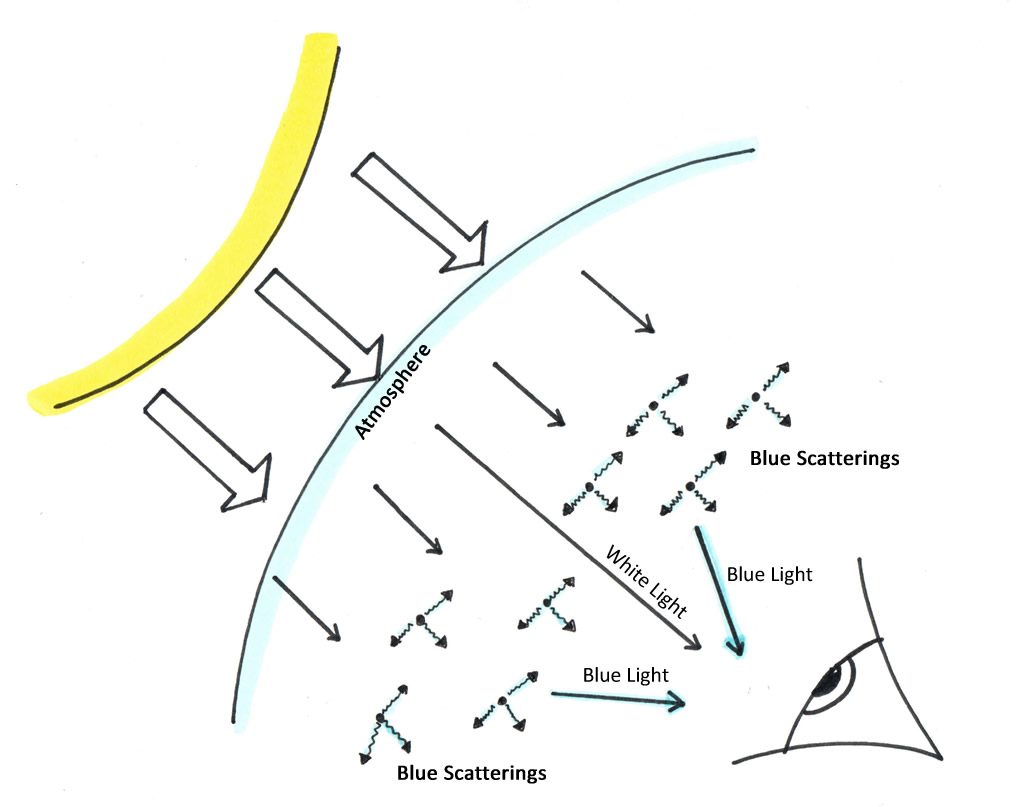 
Rayleigh scattering also indirectly explains why sunsets are red and orange : When the sun is going down over the horizon the sunlight travels through much more air on its way to your eyes than when the sun is overhead. By the time the sunlight reaches your eyes, all the blue has been scattered out, leaving only the orange and red end of the spectrum. This light does get scattered, but not by air molecules- it gets scattered by larger dust particles.

So sunsets become particularly vivid red and orange when the sky is full of dust, such as after a volcanic eruption.

The Red Planet : On Mars the atmosphere is very thin so there is relatively little Rayleigh scattering. But there is lots of dust in the air, so red light is scattered instead. This is why on Mars the sky appears red.