Winnie the Pooh – A Real Bear with a WWI Story 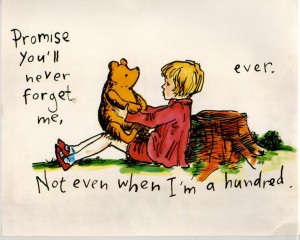 It may surprise you to know that the lovable bear, Winnie the Pooh, is actually based on a real bear. A Canadian bear actually, with a direct link to World War I.

Harry Colebourn is the man who we ultimately have to thank for introducing the writer AA. Milne, the author of the famous Winnie the Pooh books, to a bear called Winnie. That introduction occurred via a very circuitous route and was a result of empire, emigration and World War I.

Harry was born in England in 1887. He emigrated to Canada when he was 18 where he attended the Ontario Veterinary College, receiving his degree in veterinary surgery, before moving out west to Winnipeg, Manitoba.

When war broke our between Britain and Germany he volunteered. As a veterinary surgeon he would have been in high demand with armies in the field at this time, still relying upon animals to bear the brunt of much of the transport and supply.

It was whilst Harry was heading across Canada by train to the training camp at Valcartier in Quebec that he came across a hunter in White River, Ontario who had a female black bear cub for sale, having killed the cub’s mother. Colebourn felt sorry for the orphaned cub and purchased her for $20. He named her “Winnie” after his adopted home town.

When it came time to depart for overseas service Harry must have somehow persuaded the military authorities to let him take Winnie with him. For it was a newly commissioned Lieutenant Colebourn that turned up for duty on Salisbury Plain in southern England complete with black bear in tow. Winnie soon became the unofficial mascot of the Fort Garry Horse, a militia cavalry regiment to which Harry had been assigned as a veterinarian.

When the time came to en-train for France he left his beloved Winnie at London Zoo for safekeeping. Harry served for three years in France, attaining the rank of Major. He planned to take her home with him but instead, at the end of the war he donated Winnie to London Zoo, in recognition for the care she had had over the previous war years.

It was at the London Zoo that A. A. Milne and his son Christopher Robin encountered Winnie. Christopher was so taken with her that he named his teddy bear after her, which became the inspiration for Milne’s fictional character in the books Winnie-the-Pooh (1926) and The House at Pooh Corner (1928).

Winnie remained at the zoo until her death in 1934.

Some people care too much.
I think it’s called love.

People say nothing is impossible,
but I do nothing every day.

Did you ever stop to think, and forget to start again?

Isn’t it funny how a bear likes honey?

Christopher Robin with Winnie at the London Zoo.

Winnie and an Army motorbike