You’ve got (Extraordinary) Mail – Posting yourself to Freedom

We’ve all heard stories of refugees stowing away on boats or in aeroplanes (usually in the landing gear), to get to freedom but here is a truly inspirational story published over 150 years ago in the London Times :A fugitive slave who sent himself to freedom in the post.

It must be remembered that in 1850 although slavery had been abolished by Britain for over 20 years, in the United States it would still take another 15 years to take effect, after the disastrous civil war of 1861-65.

A FUGITIVE SLAVE IN LIVERPOOL-Henry Box Brown, a fugitive slave from Richmond, Virginia, arrived in this town on Friday last, by the Constantine packet ship, from America. On the 29th of March, 1849, he escaped from bondage in rather a remarkable manner. He was packed in a box 3 feet long, 2 1/2 feet deep, and 2 feet wide. Confined in this small space he was forwarded by railroad and steamboat from Richmond to Philadelphia, a distance of 350 miles. The package was directed to one of the leading anti-slavery men in Philadelphia, and was 27 hours on the road. The sufferings of the poor fellow may be imagined when it is known that the only accesses for fresh air were through small gimlet holes in the sides of the box: and although written directions were placed to “keep this side up” for more than two hours the box was turned upside down, the runaway slave being for that time with his head down and his feet up. Brown is a fine intelligent-looking man, about 35 years of age. Since his escape from slavery he has earned a subsistence by exhibiting in the free states of America a panorama of some of the appalling scenes resulting from the existence of slavery. He also delivered lectures against slavery, and thus rendered himself very obnoxious to the slaveowners of the States. Under these circumstances it was not to be wondered that, armed with the powers of the Fugitive Slave Bill, an attempt should be made to arrest him. Two, such attempts were made, and it was with the greatest difficulty Brown made his escape to this country. He is accompanied by James Boxer Smith, also a coloured man, but not a slave, who assisted to box him up at Richmond, and who has also rendered himself obnoxious to the slave party in America by his connexion with Brown. These two men have landed on our shores almost penniless. They contrived to get their panorama on board the vessel with them, but they are unable to release it, unless they receive assistance from some benevolent friends of the coloured race.-Liverpool mercury.


So When did Britain Abolish Slavery? 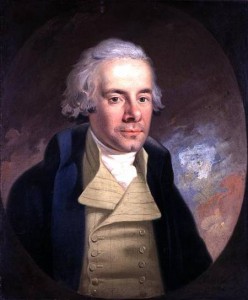 William Wilberforce leader of the movement to abolish the slave trade

In 1807 Britain abolished the trans-Atlantic slave trade. It was still legal to own and keep slaves until 1833. The Slavery Abolition Act was passed in 1833 which emancipated all slaves in the British Empire.

Although it is true that the Slave Trade Act of 1807 legally abolished the slave trade, and the Slavery Abolition Act of 1833 legally abolished slavery in Britain there was, in fact, no slave ownership or trade happening in Britain at the time of these Acts of Parliament. In terms of emancipation both acts were pre-dated by a legal case brought in 1772, pre-dating even the American Revolution.

James Somersett, a slave owned by an north American colonist from Boston, MA, had been brought to England as a personal servant. But, as Mr Somersett had not been purchased or sold in England he absconded and sued for his own freedom. The subsequent judgment found that slavery did not exist in England, so Mr Somersett kept his freedom. The case emancipated thousands (10,000+) who had been brought into the country as domestic servants of traders.

The subsequent Acts of Parliament were merely formalities to clear up any legal grey areas. Unlike much of the rest of Europe slavery had no legal standing in Britain since the middle-ages.

Whilst it is true that the mother country had abolished slavery that didn’t mean that there wasn’t slavery in the rest of the British Empire. Indeed the sugar plantations in the West Indies along with the cotton & tobacco plantations in the pre-revolutionary American colonies owed their commercial success to slavery.

Following the 1807 British abolition of the trans-Atlantic slave trade the Royal Navy was actively directed to stop and seize all slavers still transporting slaves from Africa to the U.S.