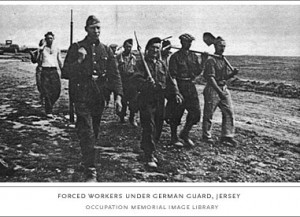 The atrocities committed by the Germans during World War II weren’t limited to mainland Europe and the notorious concentration camps. Sadly the Channel Islands had its very own death camps, administered and run by the Nazi Organisation Todt (also responsible for the building of Hitler’s Atlantic Wall).


The Awful Truth is Discovered

The awful truth only began to emerge on May 16th 1945, a week after Jersey and Guernsey were liberated, when the Germans in Alderney finally capitulated. The island’s population had been evacuated in July 1940 and the first would not return until November 1945. During the five years of occupation the Germans had gradually turned the island into a fortress by the use of slave labour consisting of mainly Russian prisoners of war and French Jews. Gun emplacements and other defensive works were constructed on a massive scale together with underground shelters and tunnels.

The first British soldiers on the island were Brigadier Snow and Rear-Admiral Stuart who found the slave workers in appalling conditions and heard reports that thousands of them had been killed. However, as the German officials had spent the last week destroying all their records they were unable to substantiate this. Over the following months British Intelligence collected evidence from the survivors which made for harrowing reading. One Russian prisoner was:

“Crucified on the camp gate, naked and in midwinter, the German guards threw buckets of cold water over him all night until he was dead, another was caught by bloodhounds when attempting to stow away to the mainland. He was hanged and crucified on the same gate. His body was left hanging on the gate for 5 days as a warning.” 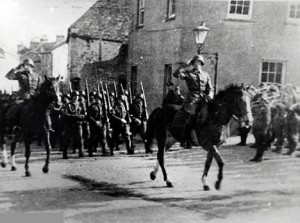 The Germans built four concentration camps in Alderney. The camps commenced operating in January 1942 and had a total inmate population of about 6,000. In 1942 the Lager Norderney camp, containing Russian and Polish POWs, and the Lager Sylt camp, a concentration camp holding Jewish slave labourers, were placed under the control of the sadistic SS-Hauptsturmführer Maximilian List. Over 700 of a total inmate population of 6,000 lost their lives before the camps were closed and the remaining inmates transferred to Germany in 1944.

The British may not have known the full extent of the horrors committed on Alderney until it was liberated but within the islands themselves suspicions and rumours were circulating well before that.

“Men who have recently been brought back after working in Alderney … have terrible stories to relate of the fiendish cruelty of the German guards towards political and Russian prisoners. We were prepared for this by what Reinhold told us, as related by a friend who had seen for himself… One case of special brutality was that of a Russian prisoner … who had an accident to his leg… the poor fellow began to lose blood at a great rate, and … stopped to pick up a piece of old sacking to bind his leg. The officer deliberately shot him. Appalling incidents of cruelty to Jews were also witnessed by Guernsey workmen. The Jews received negligible rations. They were forced to work from 5 a.m. to 10 p.m. or until they dropped. One of them fainted in a field. The Germans drove a plough-tractor over him.”


After World War II, a court-martial case was prepared against ex-SS Hauptsturmführer List, citing atrocities on Alderney. However, he did not stand trial, and is believed to have lived near Hamburg until his death in the 1980s.