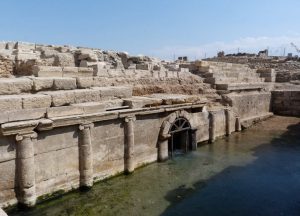 One of the world’s most chilling ruins is the Ploutonion at Hierapolis, “the Gates to Hell”. Here crowds watched priests lead animal sacrifices down into a cave, where they died mysteriously as if dragged down to the underworld.

No one knew how they did it, that is, until very recently.

Hierapolis & It’s Temple to the worship of Pluto

Hierapolis was a city built on a plateau over the modern Turkish site of Pamukkale, meaning “cotton cliffs”. Its unique landscape was formed as calcium deposits bubbled from thermal springs & formed cliffs of white limestone. 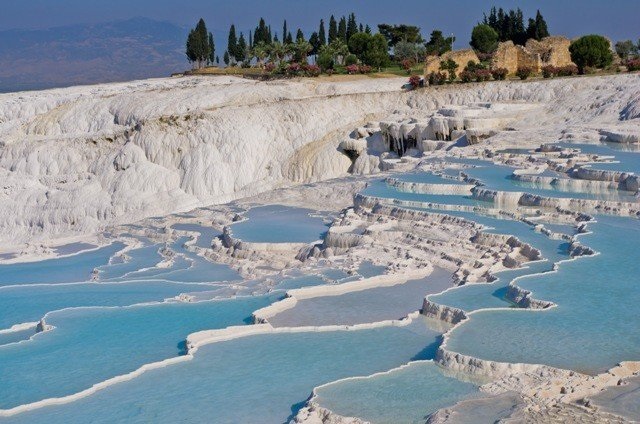 The “cotton cliffs” of Hierapolis

The city was founded as a thermal spa early in the 2nd century BC, & rose to prominence as a place where thermal waters could heal ailments. It became a Roman possession when Attalus III, King of Pergamon bequeathed his entire kingdom to Rome on his death. 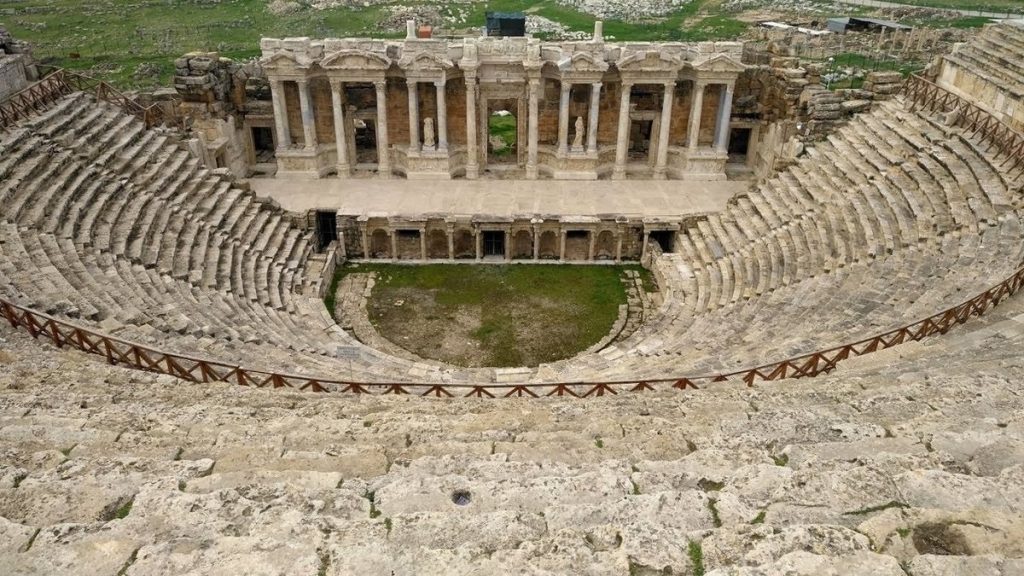 Despite its geological activity making it prone to devastating earthquakes, Hierapolis became a thriving spa town. The emperor Hadrian built an enormous theatre in the city, made to seat 15,000 people.

But as well as its healing thermal waters & its grand temple to the sun god Apollo, Hierapolis had a darker side. This was expressed in its Ploutonion, a temple for the worship of Pluto. Pluto was the ruler of the underworld in Roman myth, & a cognate(related to) with the Greek god Hades.

The Greek scholar Strabo visited Hierapolis in the first century BC, & wrote about the frightening properties of its Ploutonion in his Geographica :

“the Ploutonion… is an opening large enough to admit a man, but it reaches a considerable depth…This space is full of a vapour so misty & dense that one can scarcely see the ground. Now to those who approach the handrail anywhere round the enclosure the air is harmless… but any animal that passes inside meets instant death.
Bulls led into it fall and are dragged out dead; I threw in sparrows & they immediately breathed their last & fell”

An Explanation of the ‘Dark Powers at Work’ in the Ploutonion

Until recently, historians assumed this frightening account was an excess of the classical imagination, or some trick performed by the temple priests. But recent excavations have shown that the temple’s deadly effects were very real.

Archaeologists led by volcanologist Hardy Pfanz have found that the same geological activity that causes the Pamukkale hot springs also causes noxious gases, particularly CO₂, to pour out of the earth in this region.

Scientists testing the ruins found CO₂ making up 4-53% of the air at the mouth of the cave, & reaching as high as 91% inside. Normal atmospheric levels of CO₂ are around 0.039%, and 10% is enough to asphyxiate a person in 30 minutes.

Since CO₂ is 1.5x heavier than oxygen, the gas hung close to the floor, killing animals that entered but leaving the humans outside unharmed. It must have seemed obvious to early people: the god of death (or his hell hound Cerberus) was breathing out of the earth. 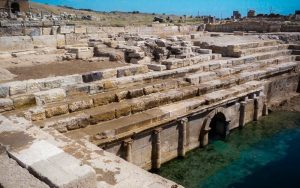 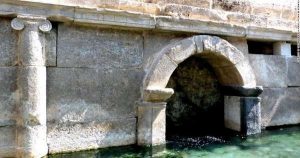 Over time, Hierapolis became a draw for ancient tourists, who wanted to see the macabre spectacle themselves. The eunuch priests of the temple led bulls down into the cave tied with ropes, while spectators watched from the stands. They would drag out its corpse minutes later.


The priests made a spectacle of entering the Ploutonion themselves, although it’s clear they understood its dangers. Strabo tells us

The priests even sold caged birds for visitors to try the cave’s powers for themselves. While the modern archaeologists uncovered the site, they observed birds flying near to the cave mouth and dropping dead from the noxious vapours.

There’s even some suggestions that the priests & perhaps temple visitors experienced hallucinations, ecstasies & visions due to the early stages of carbon dioxide poisoning.

When Christians arrived in Hierapolis, they halted the deathly rituals of the Plutonian cult. In the 6th century AD, the Ploutonion’s entrance was bricked up, & the temple was vandalised. Earthquakes in later centuries took care of the rest.

Today, the Ploutonion at Hierapolis reminds us of a time when gods and demons used to breathe out of the cracks in the earth. It reminds us that another world used to exist just out of sight, beneath the surface of our own.