It looks like Jersey may have been an offshore banking centre for far longer than anyone has suspected. In June 2012 metal detectorists Reg Mead and Richard Miles uncovered a hoard of a staggering 70,000 late Iron Age and Roman coins. They were searching in Grouville in Jersey when they came across their incredible find that has since turned out to be the largest hoard ever found in the island. 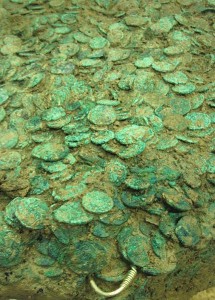 The excavated hoard . Two gold torcs have been identified at the edge of the mass of coins

The coins, which had fused into one solid mass, were found using a deep-scanning metal detector. They were searching the area after Reg and Richard had uncovered a smaller hoard of 120 coins the previous year. As soon as they realised the size of their find, they called in archaeologists from Jersey Heritage who spent several days excavating it under conditions of extreme secrecy.

The majority of the coins have a head on one side and a horse on the other. With so many coins in one location is would seem that there are far too many for them to have all belonged to one man. In total the hoard weighed several hundred kilos and it appears as if they simply dug down until they hit shale then poured the coins into the pit and covered it over with clay.

One possible explanation for the existence of this vast hoard of silver coins is that they were being hidden by Celtic tribesmen as Roman armies led by Julius Caesar advanced across Gaul in the first century BC. There would have been close links between the iron age farmers on the Channel Islands and the Celts on the mainland, so it could have been brought by boat either from nearby Normandy or Brittany.

Excavation of the pit containing the large hoard has revealed evidence of timber posts, possibly from a hut, and large quantities of burnt daub as well as late Iron Age and early Roman pottery. The presence of slag and furnace linings along with some coins which have been cut in half, could suggest that the coins were being melted down. It may be that new coins were also being minted here.

During the Roman period the Channel Islands were governed from Lyons. However only a few remnants of Roman occupation have ever been discovered on the island and in nearby Guernsey. By what appears to be a happy coincidence, archaeologists excavating the hoard cut through a layer of domestic Roman remains including pottery from a nearby settlement.

Why they were buried and why no-one ever returned to recover them is a mystery that is likely we will never discover.


So maybe this really was the start of Jersey’s finance industry. It was found under a hedge so is this an early example of “hedge fund trading” !