Home » Philosophy » Are We Capable of Understanding the Universe ?

Are We Capable of Understanding the Universe ?

Just as a fish may be barely aware of the medium in which it lives and swims, so the microstructure of empty space could be far too complex for unaided human brains
Lord Rees of Ludlow

The pursuit of science is based on the belief that the explanations we seek, be it – the origins of the universe; the nature of gravity or the explanation of the behaviour of light – are comprehensible to the human brain. But supposing they’re not? What if no human brain is well enough equipped to understand the universe. What if we are fooling ourselves by thinking that somehow if humans gather enough data and think about it hard enough we will understand?

This is certainly the opinion of eminent scientist and Astronomer Royal, Lord Rees. Lord Rees’ prediction that we will never fully be able to understand the universe in its entirety has been prompted by the failure of scientists, so far, to reconcile the forces that govern the behaviour of the cosmos with those that rule the ‘microworld’ of atoms and particles. The pursuit to find this theory is the holy grail of physics, the so called ‘grand unified theory of everything’.

In physics today there are “2 worlds” with two ways of describing them. The first is what might be called “classical physics”. This describes things in the everyday or ‘macro world’. Things like the motion of the planets, the way a ball moves through the air or how heat moves from one body to another. The kind of physics would’ve been familiar to Newton and were used to pilot Apollo 11 to the moon and back. The Second “world” is that of the very small where theories & formulae predict & govern the energy, position and movement of sub-atomic particles. This branch of physics is called “quantum mechanics”. The two worlds are very different and operate under a very different set of parameters. The two theories are deeply contradictory – and no one has yet found the mathematical tools needed to bring them together into a ‘unified theory’.

As Lord Rees commented, “Just as a fish may be barely aware of he medium in which it lives and swims, so the microstructure of empty space could be far too complex for unaided human brains.” Even if we do come up with a theory how will we know if it is the ‘true’ answer.

Scientific theory or ‘truth’ generally works along the following lines : theories are proposed, accepted when they fit the current data, and then modified, replaced or discarded when more data or greater understanding is achieved. The point being that at any one time a scientific theory can ‘seem’ to be true but consequently refuted or refined later on. 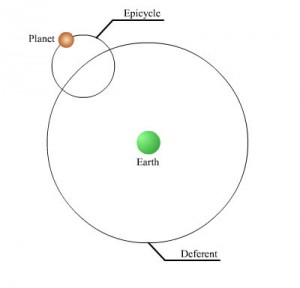 Ptolemaic Model of the Universe

This all worked until Copernicus and Kepler came along. Today we have a simple and elegant theory based on a Sun centred solar system as well as ellipses rather than circles, underpinned by Newton’s theories of motion and gravitation, which actually explain why the movements have to be the way they are. Furthermore Newton’s theory of gravitation has also subsequently been replaced by Einstein’s theories.

Many scientists have been working on the idea of a unified theory, but so far there has been no definitive answer. “String theory” seems to be the most promising idea to date. On the face of it it seems a pretty whacky theory. It suggests that the particles that form atoms are “woven from space itself” with such particles existing in 10 or 11 dimensions. Humans, by contrast, can experience only the three spatial dimensions plus time.

so how much of what there is to be understood in the universe do we really understand?

Could string theory be the modern equivalent of Ptolemy’s clockwork universe? It seems to fit but given our limited view and understanding it may just turn out to be incomplete or just plain wrong. And even if we are on the right lines in some areas, how much of what there is to be understood in the universe do we really understand? Fifty per cent? Five per cent? It may be the case that we understand only half a per cent and all the brain power we could muster might take us up to 1 or 2 per cent, in the lifetime of the human race.

So we’re back to the possibility that our pursuit of scientific explanations of the universe may be fruitless and we may never find a unified theory of everything or even understand it if we do find it.