Beating the Bankers at their Own Game – the Guernsey Way

It’s popular today to decry politicians as unimaginative and self-seeking only interested in populist vote winning policies. However in 1815 in Guernsey they had at that time among their leaders some honest men of keen intellect, who were willing to put forward some revolutionary suggestions and to embark upon a monetary experiment that was to transform a depressed and unproductive community into an active prosperous and happy community in a very short time.

The results of this experiment are all around us today – some very tangible buildings as well in your pocket right now – in the form of the States of Guernsey issued currency – the Guernsey pound.

The scheme to raise capital without increasing the debt of the States was in fact an anticipation of a revolutionary idea of social credit.

the parasitic role of bankers in the economy would be removed

The Movement’s origins lay with the economic theories of Major C.H. Douglas, who early in the 20th century wrote a number of books explaining that the then current economic problems were caused by the arbitrary control of the money supply by the banks and bankers. He proposed that money backed by gold or paper should be replaced by notes backed by the real wealth of nations, their goods, plant and machinery. A consequence of this would be that the parasitic role of bankers in the economy would be removed and the economy would as a result expand.

By 1815 Britain had been at war on and off first with Revolutionary France and then against Napoleonic France for decades.

The Channel Islands, because of their geographic location, were often in the front-line of this conflict. By the time Napoleon was finally defeated at Waterloo in 1815 life for people in Britain and especially Guernsey was hard. The effects of the Napoleonic wars had resulted in a state of despair on the part of the island community due to the acute economic distress then prevailing. Those that could were leaving the island and making their way to the mainland.

An extract from a document presented by the States to the Privy Council speaks very eloquently on the state of affairs:

In this island, eminently favoured by nature, nothing has been done by art or science towards the least improvement; nothing for the display or enjoyment of local beauties and advantages; not a road, not even an approach to the town … Thus, at the peace [of 1815], this island round itself with little or no trade, little or no disposable revenue, no inducement for the affluent to continue their abode, and no prospect of employment for the poor.


The Guernsey Market Scheme – An Idea is born

A committee was appointed in 1815 to consider in particular the overcrowded state of the market, of which it was said that :

“humanity cries out against the crush which it is difficult to get out of, and against the lack of shelter for the people who, often arriving wet or heated, remained exposed for whole hours to wind and rain, to the severity of the cold and the heat of the sun.”

The committee examined the situation, and came to some rather sage conclusions :

They chose to go for option 3 and beat the bankers at their own game!

However, at first, this proposal to use issued currency to build new a new market building was turned down. But later in that same year a different opportunity came along for which this proposal to issue State notes was agreed. The finance committee reported that £5,000 was needed for roads and a monument to the late Governor, but they had only £1,000 available at that time. It was agreed that the remaining £4,000 should be raised by the issue of State £1 notes, 1,500 of which should be payable in April 1817, 1,250 in October the same year, and 1,250 in April 1818.

The committee hailed this suggestion as :

“WITHOUT INCREASING THE DEBT OF THE STATES, we can easily succeed in finishing the works undertaken, leaving moreover in the coffers sufficient money for the other needs of the States.”

The success of this first creation of State money was so great that it was rapidly followed by others. In June 1819 the question of the market became ever more acute, and it was agreed to finance the rebuilding of it, not in the orthodox manner by raising a loan, but by the State creating the necessary notes “interest free”.

On 29th March 1826 a further issue was authorized to re-build Elizabeth College and some parochial schools.

The experiment continued over a period of 20 years, by which time Guernsey had developed from a depressed unhappy state to a position of prosperity and happiness.

Various other creations of new money took place for projects of re-building, widening the streets of St. Peter Port, reconstructing some of its buildings, making new roads and public works of many kinds. The experiment continued over a period of 20 years, by which time the people of Guernsey had developed from a depressed unhappy state to a position of prosperity and happiness.

And so the it went on until £55,000 had been issued as notes. The success being due in no small part to the great care with which the quantity of money to be issued was considered by the States.


The Banks Hit Back 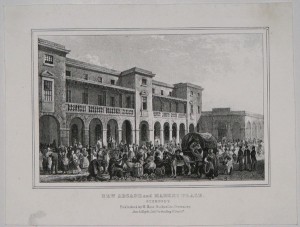 But this happy state of affairs was not to the liking of everyone, and opposition to the idea of the Island States creating their own “debt-free” money had been growing over the years, particularly among the banking interests on the island. A new bank, called the Commercial Bank, was founded in 1830. This institution, together with the old bank, failing to prevent the growing prosperity of the islanders, began to issue notes at its own discretion, flooding the island with paper money.

The then Baliff, Daniel de Lisle Brock, then intervened and conducted a vigorous attempt at restraining these private banks from this anti-social activity.

The banks demanded that the States should cease to make further issue, should withdraw £1,500 from circulation, and have no more than £40,000 in circulation.

In spite of all, however, the banks finally won the day and the Baliff eventually agreed to their demands.

Despite this however success had already been achieved – the island and islanders had benefited from major capital investment and was now prosperous again.


As a result of these “experiments” very tangible benefits were felt by the islanders in the form of the brand new Market House a refurbished Elizabeth College, better roads and a modern sewage system; all of which were constructed without a debt being incurred by the community.