Home » Channel Islands » The Guernsey Markets – Was it always in Town and What existed prior to the “New Market Building” ?

The Guernsey Markets – Was it always in Town and What existed prior to the “New Market Building” ?

In recent years the Guernsey Market buildings have undergone something of a grand transformation from the covered markets it was originally built for in the 19th century. They are certainly one of Guernsey’s most iconic landmarks, but its history has not always been as obvious. So, what was here before then and were Guernsey’s Markets always here ?

They are one of Guernsey’s most iconic landmarks

St Peter Port wasn’t the original home of the island’s markets. They started in fact, during from the early middle ages, at the Landes Du Marche in the Vale. This location was ideal for the local population thanks to its location near the centre of the island. It’s still possible to still see the western edge of the medieval market behind some of the houses in the area.

However, with the increase in travel around the Atlantic coast of Europe St Peter Port soon became a much more useful place for the market to exist. Between 1250 and 1300 the market gradually and unofficially moved to the edge of town.

In 1309 when the King’s Justices visited the island they found that the markets ‘met on Sunday during Service, to the great scandal of Christianity’ and so they agreed that it would be held every Thursday instead.

An open market area of approximately 2 vergees in size was granted outside the town boundary. It stretched from the top of the present Smith Street to Clifton in the south. 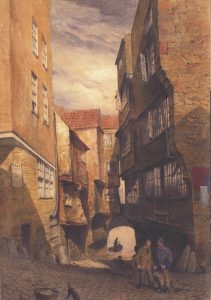 This area, outside the town boundary, was the official market for the next few hundred years. However, by 1661 there seems to have been active discussion about moving the site to the south west of the harbour.

So it was that the Guernsey Markets, previous to the building of the present market building, was set up at the bottom of High Street, in the neighbourhood of the Town Church and the narrow lanes and passages leading from there to the beach and the pier.

The market was slummy … over-crowded, filthy, smelly and in every way unsuitable place for a market

The market was undoubtedly slummy, and it would be almost impossible to find a more over-crowded, filthy, smelly and in every way unsuitable place for a market. The meat and other things were exposed to all weathers and to the mud and flies. Cow Lane and Bull Lane were very narrow, so that people could not avoid brushing against the meat. Cow Lane sloped steeply from High Street down to the beach and at high tide the sea came half-way up the lane, which was just as well because it washed away the blood from the animals slaughtered on Friday at the beach end of the lane. 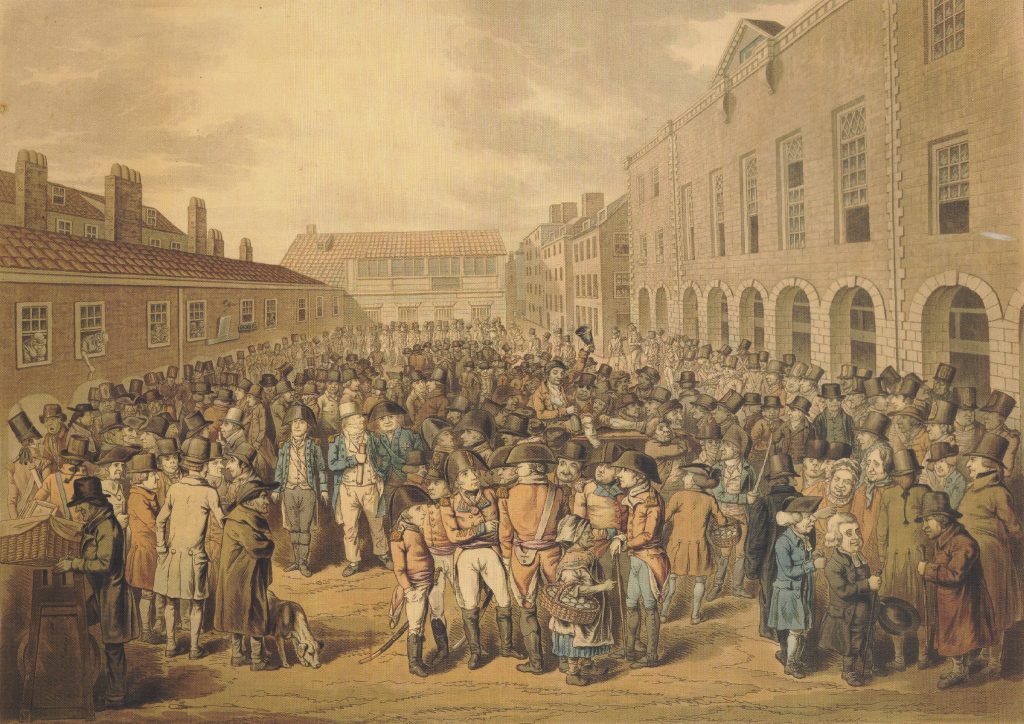 Guernsey Market Place in 1809 by Matthias Finucane. The building on the right housed a market on the ground floor and the Assembly Rooms above. The buildings on the left were swept away in the 1820s.


As commerce in and around the harbour continued to grow the market outgrew its location once again and in the 1770s there was debate about where to move it.

This was eventually settled when a syndicate obtained an Order in Council, in about 1780, for the purpose of building a solid stone market building in what was then the rectory gardens of the Town Church.

This first market building was originally intended to be a one-storey building, but by agreement with another syndicate, rooms were built over the market. This was the first iteration of what we now know as the French Halles and assembly rooms – now part of the Guille-Allès Library. 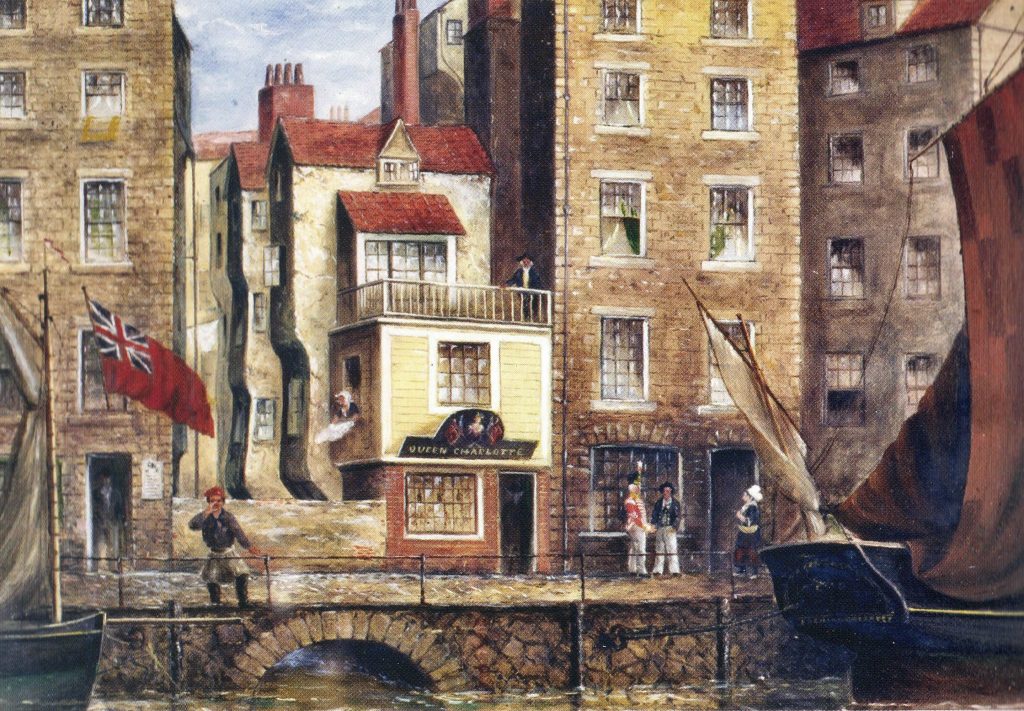 The Quay, St Peter Port, circa 1800. The harbourside was crowded with taverns. This watercolour shows the archway that led to Cow Lane and the High Street, to the area where meat was offered for sale.


The meat market was ready for the butchers in 1782 and they moved from Cow Lane and Bull Lane. The vegetable and fruit sellers erected their stalls in front of the market, now Market Square, but the fish sellers refused to move from the bottom of High Street. It wasn’t until 1812 that they were finally dislodged from there, but they only moved round to the other side of the Church where they settled down in an open space called “dessous le grille ” between the Church and the Cimetiere des Soeurs. They stayed there until a covered fish market was built in 1830.

The States bought the market in 1817 for £5,000 from the syndicate (aka the Meat Market Company). However the rooms above, which did not belong to the company, remained in the possession of their proprietors until 1871 when the States bought them for £900. 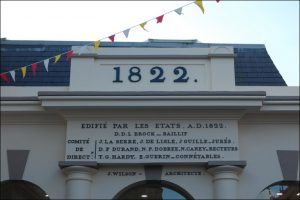 In 1822 another Meat Market, pictured left, was built and the butchers moved in. Some years later, this new Meat Market ,not being able to accommodate all the butchers, moved back again to the older market – the French Halles. The building of the other sections of the market between Market Square and Fountain Street followed. The financing of the market rebuilding project by the States was achieved by a novel innovation … the issuing of Guernsey’s own currency. An innovation we still have with us today. (see our article – “Beating the Bankers at their Own Game – the Guernsey Way”)


There was also the Pig Market, held in a shed that stood in the plantation which is now the bus terminus. Farmers who had little pigs for sale took them there on Saturdays. As a result of the falling off in pig keeping the Pig Market was closed during the 1920s.

Corner of Fountain Street Before Bonded Store Was Built

Produce on sale in the French Halles, St Peter Port. Turn of the century, . Self-sufficiency was the order of the day when transport links with the UK depended on reasonable sea conditions.

Market Square was a bustling place even before the days of the motor. A scene from the turn of the 19th Century