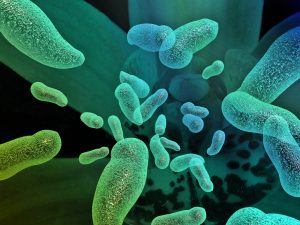 Bats are well known for employing sonar to find their way as they fly in the depths of darkened caves. What you may not know is that this highly evolved location finding mechanism, also called Echolocation or sometimes ‘bio sonar’, is actually used by several kinds of animals : from whales and dolphins to simpler forms in other groups of animals such as shrews and some cave dwelling birds.

Scientists have also found that the most simple of all animals, bacteria, also use a ‘sonar-like’ system to spot other cells around themselves in order to target them for destruction.


This finding goes to explains how some bacteria seem to ‘know’ when to switch on the production of certain toxins designed to break open nearby cells, including other micro-organisms. This can help to release useful nutrients, to help the bug spread and to ward off attack from the immune system.

Working on an intestinal bug called Enterococcus, Michael Gilmore and his team at Harvard have found that the bacterium releases two chemicals into its surroundings. One of the two substances sticks on to foreign cells, while the second substance reports back to the bacteria, telling it to make the toxin. But if there are no cells near by, the first substance sticks to the second and prevents it from reporting back, and so no toxins are made.

The scientists say that the discovery will help to design new treatments to combat bacterial infections by designing toxin inhibitors, which will be particularly useful for tackling antibiotic-resistant bacteria. The researchers also hope that it might be possible to ‘tame’ certain bacteria and engineer the system so that it can be used to detect other things in the environment, such as minerals, or other disease-causing bacteria.