Chatty Plants – When the house plants talk back

Published on May 23, 2014 in General Interest, Science, Trivia 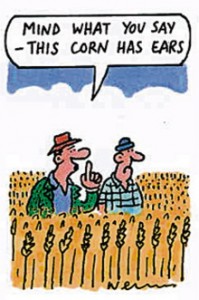 Doctor Doolittle may have been able to talk to the animals but what about plants ? Prince Charles is famous for his chatty behaviour towards his plant friends but, do plants ‘talk’ to each other ?


In a nutshell, they certainly seem to. For Example Methyl jasminate (a constituent of the famous fragrance Chanel No. 5) is produced as a danger signal by a sagebrush shrub when it is attacked by herbivores (plant munching animals). Sagebrush shrubs nearby have been observed to respond to this chemical alert by increasing the levels of their toxic defences, but other plants in the vicinity take note of the signal, too.

It is believed that chemical ‘eavesdropping’ on the misfortunes of other plants may be widespread in the green community.

For example it’s been found that tobacco plants cultivated next to sagebrush plants begin to grow much more quickly when the sagebrush is clipped (to make it emit methyl jasminate) compared with when the plants are left intact. It seems that the chemical danger signal primes the tobacco to assume that it is itself about to be eaten, so it revs up its growth. This in turn leads to a boost in the levels of chemicals that are used by the tobacco Plant to ready itself to produce toxins, including nicotine. However in order to save resources, the plant only actually switches on the final step in the production line – ie actually creates toxins – when it is physically attacked.

It is believed that chemical ‘eavesdropping’ on the misfortunes of other plants may be widespread in the green community.