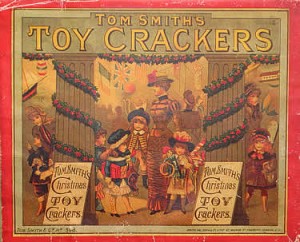 Christmas wouldn’t be Christmas without the Cracker. That extra piece of trimming that helps make up the Christmas table with it’s paper hats, silly (sometimes usefull) gifts and jokes and mottos that we all like to groan at.


It was on a trip to Paris, in 1840, that an adventurous and forward thinking Tom Smith discovered the ‘bon bon’ sugared almond, wrapped in a twist of tissue paper. Seven years later this simple idea evolved into the Christmas Cracker.

By placing a small love motto in the tissue paper he created enormous interest in this product, especially at Christmas and it was during a search for inspiration to achieve even greater sales that he casually threw a log on the fire. The crackle sound, made by the burning log, gave him the idea that would eventually lead to the crackers we know and love today. After a great deal of hard work and experimentation he came up with a cracking mechanism that created a ‘pop’as the “bon bon” wrapping was broken. This eventually became the snap and the cracker was born.

The only known picture of Tom Smith

Over the next few years his idea evolved and grew and he moved from his original premises in Clerkenwell, East London, to Finsbury Square, in the City. His sons, Tom, Walter and Henry took over the business when he died and later a drinking fountain was erected in Finsbury Square, by Walter, in memory of his mother and to commemorate the life of the man who invented the Christmas Cracker.

It was Walter who introduced the paper hats and he toured the world to find new and unusual ideas for the gifts. The company was very aware of current affairs and crackers were created for the Suffragettes, War Heroes, Charlie Chaplin, The Coronation and many other great occasions. Exclusive crackers were also made for the Royal Family and still are to this day.


Some of those Cracker Jokes…

Here’s a collection of what we at guernseyDonkey.com consider some of the less ‘groanworthy’ cracker jokes.

Where does Father Christmas go to recover after Christmas?
An elf farm.

What did Cinderella say when her photos didn’t arrive on time?
One day my prints will come.

What do you call two happy mushrooms?
Fun guys.

What is Good King Wenceslas’s favourite pizza?
One that’s deep pan, crisp and even.

How do you stop your dog from chasing men on bicycles?
Take away his bicycle.

Who hides in the bakery at Christmas?
A mince spy.

Why did Santa’s helpers see the therapist?
Because they had a low elf-esteem