the Romans made the first glass panes for windows

A world without glass is unthinkable. Entire buildings today can be made up pretty much entirely of glass. We use it to correct eye site, we drink out of it, we use it in windows, there’s glass on your mobile phone, on furniture the list is almost endless. It’s a pretty strange substance if you think about it. But when did man first discover it, use it and eventually learn how to manufacture it?

During the Stone Age, obsidian was the first type of naturally occurring glass to be used. It is a material that results from volcanic lava coming into contact with water. Gemstones were later made out of obsidian, and with a bit of elbow grease it could be polished up and used as a mirror. It was also a material out of which weapons could be fashioned.

The formula for making glass, so the story goes, was discovered pre-3000 BC. It is said that a merchant ship anchored for the night and the crew set about cooking their dinner on a roaring fire on the beach. When they couldn’t find rocks to support the pots of food, they took lumps of nitrum (soda and potash) from the ship. On contact with heat and sand the nitrum formed a clear liquid that set into glass.

Egyptians developed the method to a useful end in 1500 BC when they began pouring the molten liquid into moulds to make receptacles such as bottles and jars. The Romans made the first glass panes for windows, though they didn’t appear as they do today because the finished surface was very uneven, and light shone through it only very poorly. Still, the windows were of some use for those who could afford them, as they allowed a bit more light into their homes and some light was better than none at all.

Medieval stained glass is the coloured and painted glass of medieval Europe from the 10th century to the 16th century. For much of this period stained glass windows were the major pictorial art form, particularly in northern France, Germany and England, where windows tended to be larger than in southern Europe (in Italy, for example, frescos were more common).

Stained glass windows were used predominantly in churches, but were also found in wealthy domestic settings and public buildings such as town halls, though surviving examples of secular glass are very rare indeed. The purpose of stained glass windows in a church was both to enhance the beauty of their setting and to inform the viewer through narrative or symbolism. The subject matter was generally religious in churches, though “portraits” and heraldry are often included, and many narrative scenes give valuable insights into the medieval world.

In 1905, Eduoard Bencdictus was the man behind the ingenious idea that led to laminated glass for car windows. Previously, standard glass would shatter on high-speed collisions and produce potentially lethal shards. Benedictus simply glued a very thin sheet of plastic between two thin sheets of glass. If the glass broke, the pieces would remain adhered to the plastic sheet.

Prior to 1952 the quality of glass was still poor. Window panes would be unevenly set and contained bubbles that caused unwanted light distortion. Flat surfaces could only be obtained by shaving off the uneven bits – a very laborious task. Alistair Pilkington tinkered with ideas to solve this problem for seven years, eventually cracking the glass question with a technique that involved heating the glass to a molten state and pouring a layer of it over liquefied tin. The tin served to flatten one side, and the other side was flamed to even it out. This became known as the float glass technique, and Pilkington Glass is still going strong today. 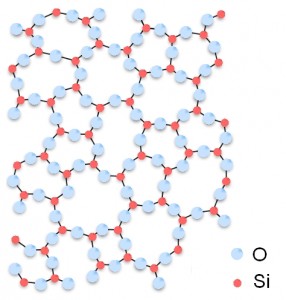 The most familiar type of glass, used for centuries in windows and drinking vessels, is soda-lime glass, composed of about 75% silica (SiO2) plus Na2O, CaO, and several minor additives. Often, the term glass is used in a restricted sense to refer to this specific use.